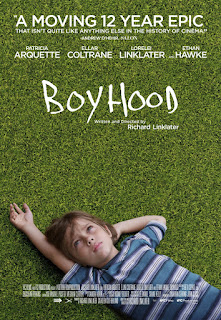 A simple coming of age story of a boy named Mason, as he progresses from a little boy to his freshman year of college.

When Mason and his dad go on a camping trip during his early teen years.

"I just feel like there are so many things that I could be doing and probably want to be doing that I'm just not."

"You know how everyone's always saying seize the moment? I don't know, I'm kind of thinking it's the other way around, you know, like the moment seizes us."

I'll say this right from the get-go, Boyhood is not a film for everyone. There is no plot, there is no storyline arc, there is no overwhelming drama to hook those that need suspense and thrills in their entertainment. Boyhood is the purest coming of age film you may ever see. Just a profound film that follows the growth of a young boy throughout his youth until his first year of college, and all of the phases and stuff he goes through, external and self-imposed, in between.

What makes this film such a tremendous film is the fact that it was shot over twelve years using the same actors which REALLY lends to the art piece. Seeing Mason grow up connects you to him as a viewer as he and his family change before your eyes. I can't even imagine the amount of production and diligence it must have taken to film this over a decade.

The film is a testament to how we view life, the moments that make us, and the journey that is. If you're a fan of these kind of movies, please go out of your way to see this.