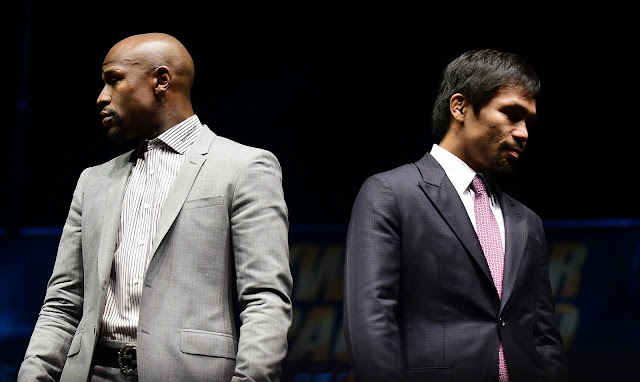 So I guess I wasn't done on this front. Because as they days move on from the so called "fight of the century" (Isn't boxing full of all sorts of hyperbole, even when you think it could be true), there is more and more, and yes, more fallout from this fight that continues to bury the sport of boxing.

There is the now significant tear in Manny Pacquiao's arm that has become publicized. Is it an excuse? Absolutely not. I'm a big believer in the Derek Jeter school of thought - if you're healthy enough to perform, don't use your injuries as an excuse. The injury chatter bantered about out of the Pacquiao camp is very weak. But at the same time, I have to admit and yes, still ponder, would it have made a difference? Sadly, I don't care THAT much. Which says all about this entire situation.

And yes, the idea that we all watched (and PAID!) for a fight that should have been postponed is downright criminal. Again, boxing at its finest.


And of course, there is also Floyd Mayweather who has now tossed out the feeler of giving Pacquiao another opportunity. This of course, on top of the building hype for his September fight as being his "last".

Oh boxing, could you be any more of a mess?

With a few days to clearly think it over, I still agree that pay-per-view is dead and the fight we witnessed last Saturday did much to continue that direction. I also believe the trust from casual fans will take an enormously long time to earn once again.

Boxing felt the same as it always has on Saturday night. Typical announcing. Typical video shots. Typical graphics. Typical (and lame) connection. You want to see a sport that has yet evolved, it's boxing.

There is a reason the UFC and MMA continues to capture the newer generations of fight fans. It's quick. It's innovative in the way it's shot. The video packages are well done and reveals the personality of ALL of the fighters. And yes, fans feel connected. Going a bit further, the UFC understands it's about connection, event presentation, and development of characters. Dana White admittedly has pulled many of these philosophies from pro wrestling, who lets be honest, is the very best at this. It's what their business is.

You want a prime example? In today's social media world, Saturday's telecast didn't even have a hashtag for viewers to get in on the conversation. Not even a modern concept to hook new viewers, or overwhelm the huge audience it attracted. Mayweather vs. Pacquiao sells itself to be quite honest. The opportunity was there to introduce the new age of boxing and solidify the future. They failed.

There was a great young boxer on the undercard who could potentially be the future of boxing in Vasyl Lomachenko, and the casual fan would have never known. I've never heard of him prior to last Saturday's event, and he definitely surprised the world.

However, there was not one video package introducing us to him, his background, or even connecting us. Not one interview, followup, or breakdown of his skills. Not any effort used to make these younger guys household names for the future. The undercard was wasted - tremendously wasted - and some young talented fighters got nothing out of it.

Boxing fans should have walked away with atleast the notion that Lamenchenko is a viable option to watch for the future. Nope. Forget it.

Boxing blew their chance to develop their next wave of stars. Wasted it, is more likely. With such a large audience, why wouldn't this be a priority?

So yes, as the sport seems to move on from this, it should be interesting to see where it goes. I'm not sure what cupcake Mayweather's camp will handpick for his next fight in September, and you know it will be a cupcake. Or even, who would care to see a Mayweather vs. Pacquiao match? But the next chapter in boxing isn't very clear right now.

More than ever is the sport's ineptitude apparent, at least to me. Luckily for the sport, there are fans (like myself) who are still clinging on to the memories of great fighters and great memories, and who still seem desperate for boxing to be the way it used to be. The way we learned from older generations. The way I became a fan through my father's interest and fandom. But even this sentimental group looks to be moving on.

More than ever is last Saturday's fight looking like a huge turning point for the sport, and in the very worst way. The future looks baron, and it appears the sport has no one else to blame but themselves.