Brady Knew! And it's a Big Deal 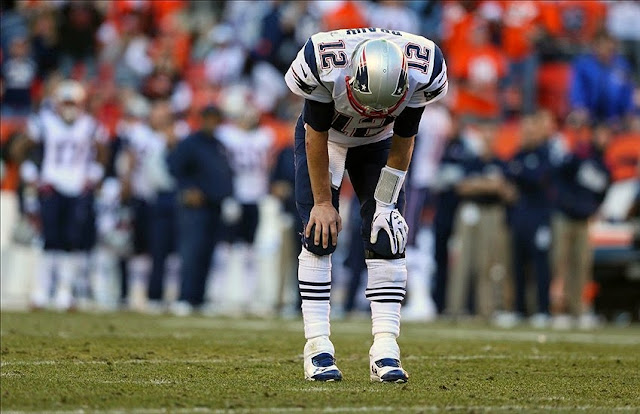 So let me get this absolutely straight - the investigation conducted and the final report concluded that Patriots personnel, including Tom Brady, knew about #Deflategate (don't you just love hashtags) and the balls being altered?

OK folks, gear up, because I'm sure this is a post many of you will disagree with me on, but isn't this a super, mega, huge, gigantic deal!?

The game's biggest star has been pretty much caught cheating, and knowingly cheating. Nonetheless, en route to a championship? Call me crazy, but that's a pretty big deal, and of course, should warrant much scrutiny and discipline from the NFL. Although, I won't hold my breath on the latter occurring swiftly.


Nonetheless, if this is 100% accurate, I cannot see Tom Brady in the same pedestal I've held my all-time greatest athletes. The way I've admired his clutch performances and intense competitiveness. Especially now that we've learned he refused to cooperate with the investigation.

And I'm sure this is a moment when sports fans split their opinion on the definition of cheating or how they hold others accountable on cheating. We see it still well after the years of steroid use in baseball - some guys are shunned, some were forgiven. Some give them a pass, some don't. Some believe there is a "degree level of cheating", others believe cheating is just that, cheating.

I'll leave that up to you.

But for the life of me, I can't wrap my mind around the fact that a quarterback altered game equipment in his favor, against the rules of the NFL, during the playoffs, en route to a championship, and not believe it's a big deal. Again, like a HUGE deal.

What if Derek Jeter, who Tom Brady's career draws many parrallels to, was caught cheating for a corked bat in the 2000 World Series? I'm sure that would be big. I'm sure we would look at Jeter differently. Just saying...

Sure, the Pats handed the Colts a beating in the AFC Championship game, anyway. Sure, the Patriots were handed a Super Bowl by Pete Carroll's decision to throw on the one yard line (still unbelievable), but all of these scenarios are affected by just that - a cheating variable.

A variable by non other than Tom freakin' Brady.

I dislike - absolutely despise - "legacy" chatter as I feel it ultimately defines itself, but I have to ponder why someone so good would resort to something so minor for an edge, risking his entire credibility.

Or of course, in today's skeptical climate- is this the first time?

Whatever the reason is, this is big. So big. And it should be interesting to see if the NFL treats it as such, or handles it's biggest star with kiddie gloves.