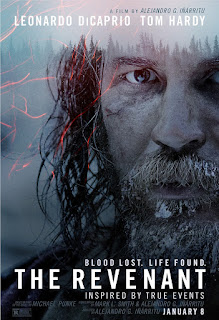 After being mauled by a bear and left for dead, a frontiersman fights to survive and to get revenge on the man who left him and also killed his son.

Prior to leaving, the men are ambushed by Native Americans in what escalates into a very bloody battle.

Jones: Those pelts are stolen.
Elk Dog: You all have stolen everything from us. Everything! The land. The animals.

The Revenant really is a beautiful movie to watch. Everything visually is fantastic. The camera angles, the detail on the blood shed, the changeof scenes for effect - everything. Supporting this is the superb acting by DiCaprio and especially, Tom Hardy, who easily steals the film.

With a film with such periodic specifity, The Revenant did a good job of making it understandable, but at the same time added the elements in there that provokes thought on what these times were like. From the tension between Native Americans and others, the rapes and other horrible things that occurred, to the dialogue that referred to the treatment of people of color, the film does a good job of not hiding the truths of the time, but also does not make the issues takeaway from the plot.

All in all, The Revenant is fantastic. Be wary, it's a long one, but it's utterly a fantastic watch.