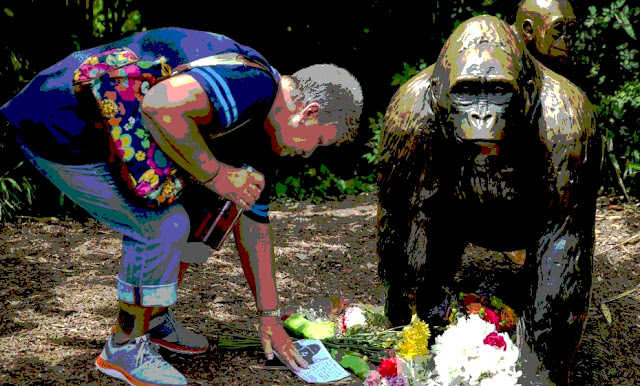 I'm pretty sure what I am about to explain is going to annoy and possibly anger a few readers, but hey, that's life. And quite frankly, more than ever, that's where we are as a society these days - vocal, opinionated, and fiery more than ever.

With that said, I don't quite understand the overall "rage" regarding the shooting of the Cincinnati Gorilla, Harambe. Yes, I am sure your eyes have widened and your blood pressure have soared, but again, I'm being truthful - I just don't understand the fury.

I am aware, completely sympathetic, and conscious of the fact that a rare Silverback Gorilla was killed in this situation. I'm not at all cold-blooded when it comes to this.

However, was not a child's life saved? Sorry, I keep coming back to this point as it seems those who are outraged continue to point to irrelevant matters in the situation to justify their point. I've heard and read plenty - Why was the child not supervised? Why couldn't the Gorilla be tranquilized?

Others have gone as far as claiming negligence on the part of the zoo and the parent.

Again, just my opinion, but non of these questions, reasoning, or accusations trump this fact - a child's life was in danger, and the child was saved.

You read these stories of the family being threatened via social media with comments such as, "that animal is more important than your s--t kid", "You're a killer!", and "U should've been shot", and again I have to wonder, did we forget a child's life was saved?!

Let's be honest, I see it everywhere, all the time, everyday - great parents who aren't perfect. Who turn away for a second, or miss a moment, or have a misstep. I'm not making an excuse, but it does happen. It's the part of parenting I hear about that is the most stressful and illicit the most fear. And the part that many swoop judgement down upon parents without understanding or having empathy for this aspect.

And again, the child was not harmed! But the Gorilla...yeah, yeah, I know...

I can you tell that if my child were in a habitat with a 450 pound wild Gorilla, I wouldn't care what happened to said Gorilla, animal, habitat, or the zoo, as long as my child was rescued and not harmed. Judge me all you want. But I would wish as many bullets to fire down upon any Gorilla, beast, or robot, or whatever, that has the potential of hurting my child. Wouldn't we all?

But, hey, that's where we are today. That's the blessing and curse of the internet.

What would have happened if the Gorilla did in fact, unfortunately, somehow, harm or even kill the child? What would the narrative be then? Still, bad parent? Would we rejoice that the Gorilla's life was spared? I shudder to think... Again, when does the life of the child come into play here?

Yet, if I'm truly letting the honesty fly here, where was this animal outrage when horses were dropping left and right for sport two weeks ago in the Preakness? Or towards the fact we believe the best welfare for these animals are in captivity in zoos?

And if you really are asking me to reach down to the depths of my soul and uncover my honest opinion on this: I find it in utter poor taste, thus so predictable, how this country loses it's you-know-what over the (albeit tragic) death of a rare Gorilla, yet, finds alternative campaigns (All Animals Lives Matter - seriously?!)  and is comparably passionless on the issue of brown bodies being killed unwarranted throughout our nation.