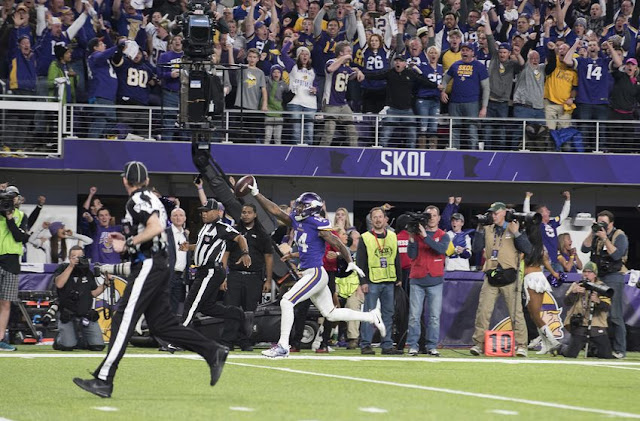 1. Minnesota Vikings Win - It was the most football I've watched since last year's Super Bowl, and I'm actually glad I did. I watched the remaining 1:57 from a dinner establishment, and it was rather riveting. Such a cool moment for Stefan Diggs. In so many ways that entire scenario was rather unreal. Almost movie-like.

2. Don Lemon - Whoa! I think it's safe to say Lemon is not a fan of the President, and really, in some ways, become a voice for people of color under this current administration. His words on Thursday night were fierce, true, and authentic on how many POCs felt after the President's comments. It's a sudden change from Lemon's reputation following the Ferguson riots.

3. Mark Wahlberg - Sure, it took some public pressure. And sure, it may even look like a PR stunt. But still, Wahlberg did the right thing after news broke he earned $1.5 million and Michelle Williams earned $1,000. A donation in her name of the entire $1.5 million was the right thing to do. But even better, is the advocacy on Wahlberg's part for women. Nicely done.

1. Sam's Club Closings - This was just way too sad. In all of the comments made about the new tax plan and some looking to Walmart's new minimum wage increase as the effects of it, the same company closed over 600 Sam's clubs stores suddenly. I can't even imagine the thoughts and reactions of those workers heading to work to find their job was instantly gone. So sad. So, so sad.

2. "Shithole" Comments - I don't even know what to say with our President anymore. I really don't. Even worse? Those who attempt to spin this garbage in defense of him. It's not so much the description of the countries that bothers me, but rather the continued narrative (and pattern) against people of color from the President that was troubling for me. It just doesn't end.

3. Las Vegas Gunman - For some reason this situation has disappeared from our society's interest or conscience, which is unfortunate. New reports find that the killer did take steps to thwart law enforcement from stopping his plan or even finding his motive. Again, this was terrorism. And once again, the topic of gun control has disappeared. Until of course, this happens again.