Thoughts on the 2018 Baseball Hall of Fame Ballot 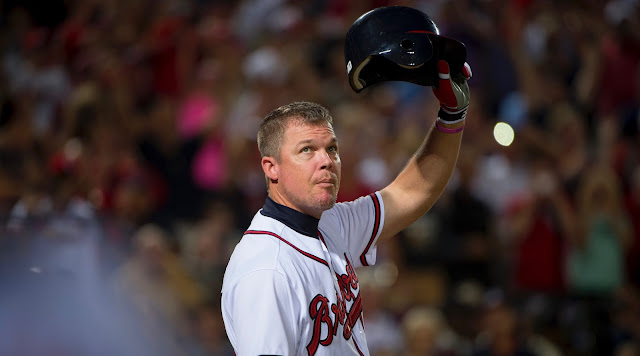 Oh fire up the debate engine, because the hot stove just ain't working!

No really, the hot stove isn't working. In fact, it might be broken.

But of course, while free agency sorts itself out, we get some fun stuff to discuss, bicker, and to gripe about in the usual Hall of Fame Ballot unveiling. For me, some get a bit worked up about the Hall of Fame. I'm not just a numbers guy, but I do believe there is an eye test, or even a "feel" to a player. You should just know a Hall of Famer. And if you don't, then yeah, we can go deeper.

In my opinion, there are just too many fans out there who always want to be the smartest person in the room when it comes to these debates. But I digress...

The selection of Chipper Jones, Vladimir Guerrero, Jim Thome and Trevor Hoffman are all worthy selections. No disputes at all in these selections. As always, I do have some quick thoughts on this year's ballot.


And here they are:

- As always, Clemens and Bonds continue to rise each year. And for me  the thought is - as always - when is the wait - aka the punishment - for being the face of the steroid era considered over? Is it year seven? Eight? Or are we making them sweat it out until the end. And if that's the case, when do we get the next ridiculous reminder in the form of a letter from Joe Morgan on the "righteousness" of the current Hall of Fame?

- By the way, if we're punishing Bonds and Clemens in the court of public opinion for guilty summonses, how does Manny Ramirez, who failed two - TWO! - drug tests following the "steroid era" garner 22%? I have no way of explaining this. None.

- Even before the ballots were unveiled, I thought Joel Sherman's point of people never falling off a ballot made SO much sense. Because it's true. Shouldn't we examine the baseball life of a person? Joe Torre the manager pushed his career into the Hall of Fame realm. And that's one of many examples. Why does one "fall off" after ten years? What if they contribute to the game in a different way later on? Give the piece a read - of course after this current gem of literature.

- And dare I say, if Alex Rodriguez keeps up post-baseball career in broadcasting, shouldn't that be weighed as well. But for real though, I love A-Rod. I do. I miss the guy. But like Manny, he was busted after the era. I have very little sympathy for those after laws and efforts were put in place to curtail the "loosy goosey" era, as A-Rod once put it.

- As always, the perplexity of the DH is one that I never understand. In a sport where only two leagues in the entire world - TWO! - and that is counting all levels of competitive baseball, does not employ the designated hitter rule, why do we punish players for filling this need? We continuously view these players as if they selected to "be a DH". It's the same way every pitcher - ant any level - will assure you they can rake.

Well they can't. But that's okay. Take it from this former college relief pitcher. We can't.

Maybe I'm naive, but these crazy labels and stigmas we've created in the game is mind boggling. As I always argue, should an AL pitcher NOT be allowed in the Hall of Fame because he didn't play both sides? Should a player be penalized for playing the position written for him by a manager or even the structure of a current ball club?

A DH is a position in baseball. Sorry "traditionalists", but it is. If the numbers are extraordinary for a career DH, the player is a Hall of Famer. If not, then he isn't. But let's stop with the "a DH can't go into the Hall of Fame" discussion. It's beyond ignorant at this point.

And for the record, I find their to be beauty in the fact both leagues employ different rules on the DH matter. I think it creates an interesting dynamic. But I'm sure I'm in the minority.

- Speaking of stigmas, how do we feel collectively about Larry Walker? Not saying he's also a Hall of Famer, but don't you just love the "but, he played in Colorado" statements. Ugh. Hey Nolan Arenado, take note on your potential Hall of Fame potential. You play in Colorado - disqualified.

- Call me crazy, but I strongly believe Billy Wagner was a better pitcher than Trevor Hoffman. In fact, I believe behind my guy Mo Rivera, Wagner was the second best closer in that generation. I have nothing but love for Wagner, a fellow Division III pitcher. My man was filthy.

- Speaking of favorites, you all very much know my favorite starting pitcher to watch pitch was indeed Mike Mussina. I saw him much more when he was a Yankee on the other end of his career, and for me, I like the case currently budding to get Moose into the Hall. So smart. Pitcher in every sense of the word.

- Jeff Kent is a Hall of Famer, period.

- The case for Fred McGriff is one that perplexes me each year. I'm still so torn on how to feel about him. You know, taking into consideration everything that he is, and the era around him that was. Plus, those Tom Emanski endorsement commercials are Hall of Fame worthy. But seriously though, the Crime Dog's case in very intriguing.

- Ditto on Gary Sheffield. Numbers are sneaky good. And Sheff was a damn great athlete. Unfortunately, he moved around so often, I don't think he'll ever have a strong media base to fight for him.

- It's a shame Johan Santana fell off the list. His case deserves a second look. So dominant. Again, can we keep players on the list longer to give them the proper due?

- Speaking of second looks, it shocked me that Sammy Sosa was still on the ballot! Talk about perplexing figures, Sammy Sosa's career and demise in baseball would make for a very intriguing documentary. An incredible story.

By the way, glance at Sosa's numbers - UNREAL!

- Mariano Rivera is on the ballot next year. YES!!! I may need to make a trip to Cooperstown for that one. But as always, it'll be interesting to see who doesn't vote for Mo. Because you know, "he's a closer" and he doesn't pitch enough innings...yadda, yadda, yadda.

Congrats to the class of 2018. It was an honor to watch you play this game I love.