Another Heartbreak: Thoughts on Porzingis Injury 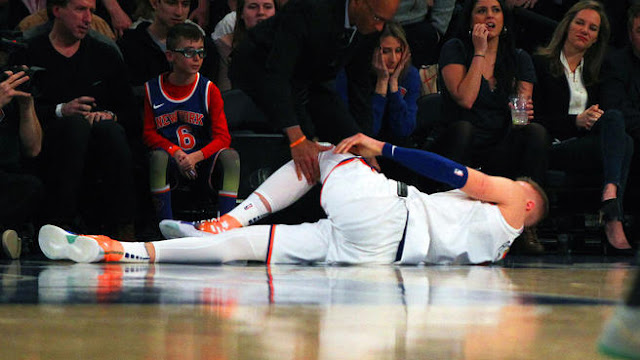 I want to vent. I want to type and let my words fly in anger, disbelief, and frustration. But honestly, I'm not sure what I want to say.

It's a weird in-between I find myself in - mourning the fall of our present and future, and of course, thinking to myself, this is just so Knicks. Absolutely, this would happen to us.

After all, since the trade of Patrick Ewing, to expect the worst and hope for the best is the mantra of Knicks fandom. Our trades don't work out. We overpay free agents who suddenly get Space Jam'ed and forget how to play. We fire and hire coaches like the average purchase person purchases milk. And we never get building pieces. Like, rare, franchise building pieces.

So imagine what I felt like to have a Unicorn on my team. It was practically a uKNICKorn. And now, we have that snuffed out with the same amount pain as we watched Kristaps Porzinigis clutch his left knee.

It's easy to play arm-chair general manager or pretend like your foray as GM in NBA 2K is the line of reasoning that was like, ummm, you know, clearly obvious, bro! Those subtle whispers of "trade Porzingis now while his value is high - he's so fragile!" are now screams, and all-of-a-sudden made to seem like viable options that a "smart" franchise would do. Pfft. We now see this especially with the sports talking heads who flip flop on opinions more than politicians and 24-hour news stations these days.

I never believed that. Porzingis wanted NYC. And he's a Knick. And I still believe he is.

However, now, a foundation being built under Scott Perry and Steve Mills - a foundation that actually seemed trustworthy, doable, and sensible (Hallelujah!!) - is now completely blown up. For now...well, we'll see. The uncertainty is even more damning.

And dare I say, there is the thought that maybe, Porzingis is never the same again. That makes me super sad.

But here we are, another - ANOTHER! - losing season is on tap with yet another - ANOTHER! - playoff-less Spring on the horizon. As agitating as it was at times, there was some intrigue in this season, in watching the development period of a group that was fun and maddening at the same time. The Knicks were indeed slightly compelling. There was also hope. HOPE! Could they break into the playoffs? So much for that.

Regardless, here we are, another heartbreak for this Knicks fandom. One that just leaves me shaking my head in disbelief. When is it our time? When?!

Get better fast, KP. Gotham needs you back.

In the meantime, what's a fandom supposed to do when the present and future of your franchise is once again, delayed?

Gotta be honest, waiting is tiring...and THAT is the toughest part of Knicks fandom.