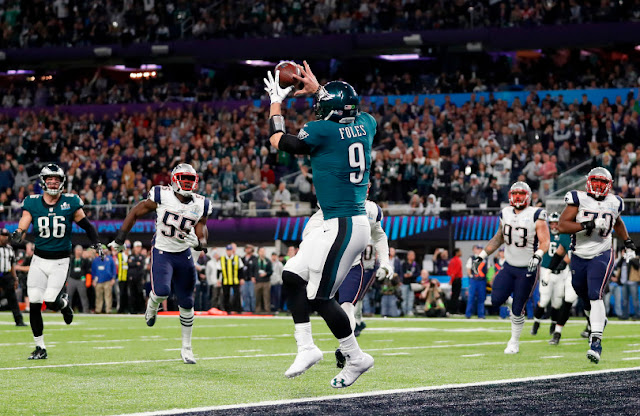 1. Cleveland Indians - Great job by the Indians in finally - FINALLY - announcing that they will be doing away with the Chief Wahoo logo. The names can be a tribute, you can make a case for that, but there is nothing flattering about that logo for indigenous people. Never has been.

1. Super Bowl LII - Well, I didn't watch completely. Had the game on the small screen while I read and did work, and the wife watched HGTV on the main screen in the living room. I looked up and saw a helmet to helmet collision early on and almost quit. I stuck through, and it was a good game. I'll give it that. Still, harder and harder to support this game, though. Regardless, congrats to Eagles fans. Always nice to see passionate and loyal fan bases get rewarded.

3. CNN - I try to watch as many news coverages as possible - it just gives me all of the perspectives. After all, we know how slanted most of them are. However, kudos to CNN who offered quite a round table after the State of the Union which was mixed with many voices from both sides of the aisle. The banter was great discourse, and even offered moments you rarely see - both sides agreeing on matters.

1. School Shooting - We had another school shooting and it barely made front page news. Gosh, remember when we weren't desensitized to this?

2. Amtrak Train Crash - Horrific news of the train crash that killed two in South Carolina. Recent details of the train being on the wrong track is rather horrifying to say the least.

3. Dodge Trucks - What was up with using Dr. King to sell trucks? Who thought that was a bright idea at Dodge? Sometimes, the American motor industry baffles me in so many ways.