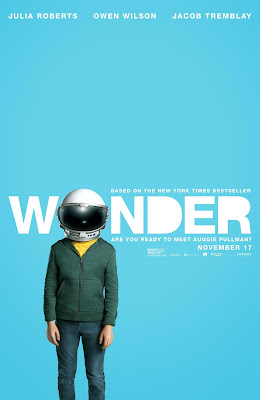 Based on the New York Times bestseller, a boy with a facial deformity enters school for the first time and has a profound impact on those around him, and those who come across his existence.

While sitting alone, Summer, a girl who has wrestled with feelings of the crowd she has hung out with, leaves her table and sits with Auggie. After resistance from Auggie, she explains that she is just looking for a good friend.

"We're all fighting battles everyday. All you need to do is look."

"When given the choice between being right or being kind, choose kind."

Wow. This film really blew me away. I love a great coming of age film, or even a thought-provoking film, and this was just that - both. I didn't read the book, so my perspective was at zero going in, but the film now has me wanting to read the book as well. It's that good.

The moral message of inner beauty is of course there, but the film deal more about the way we look at one another, and often, how we need to look deeper on the actions, or inactions, of what we make generalizations on. We all do indeed have battles we deal with. And often, we need to see one another for that, and not for "change".

Tremblay was phenomenal in the role of Auggie. Actually, all of the kids in this movie were fantastic! Middle School isn't an easy time, and this film captures that essence. Also, Julia Roberts really delivered as the mom of Auggie. It was hard not to feel for her character who had a special connection with him.

All in all, this is a great film with some great human elements to it. It's a fantastic feel-good film. Check it out if you have some time.