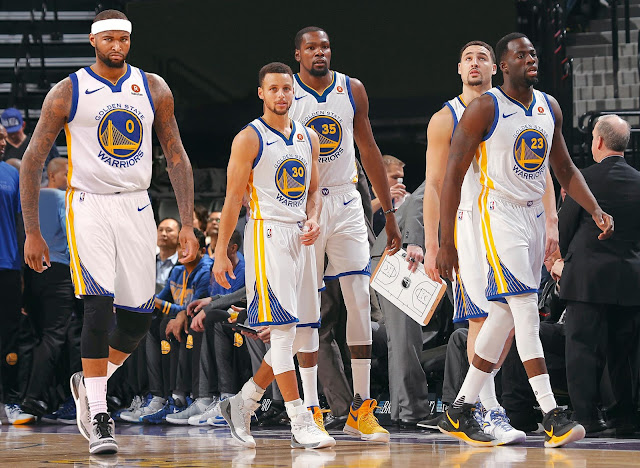 Quite the title for this post, huh? Maybe you're wondering if I'm OK. No worries, I'm totally and completely fine. I'm thinking rationally and clearly. But yes, applaud the Golden State Warriors on their latest acquisition of Demarcus Cousins. Maybe even a standing ovation. Again, totally feeling normal.

As the NBA world and sports fans clamor, and at times cry, about competitive balance and the 2018-19 season being over, I'm not in that same mind frame. I found what the Warriors did to be absolutely genius, downright bold, and quite frankly, something that should spark appreciation, and even dare I say, competition - YES, COMPETITION - around the league.

So no, I'm not going to quit basketball. I appreciate the game too much, and quite frankly, it get's me through the Winter until baseball returns. And no, I'm not fed up - after all, let's be honest, I'm a Knicks fan. Along this theory, I would've given up a long time ago.

What I am, is impressed, and even more interested. Here is why: 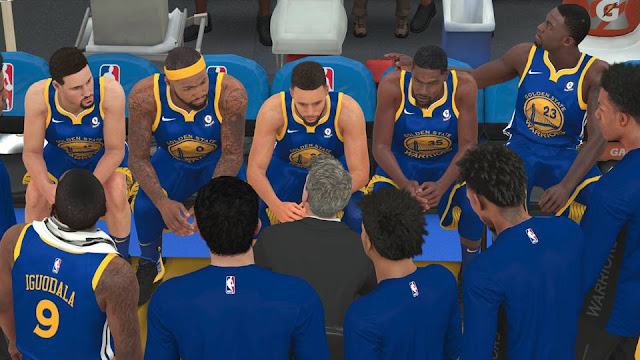 What the heck does that mean, you say? Well, for you sports video game lovers, especially those like me, who can waste hours diving into franchise mode, tell me this isn't the kind of move you would make if you had chance?

I know that sounds rather crazy to justify the signing, but the Warriors had an opportunity to take a risk on getting EVEN BETTER (who thought that was possible?) within the confines and structure of their available resources. I can't fault that.

If you're a Warriors fan, (no not those fans, like a real one, from the Bay Area) how could you fault that? How can you fault your team going out and improving?

The rest of the NBA is currently trying to just merely diminish the gap between themselves and the Champs, never mind catching them. Are the Warriors obligated to stand by and doing nothing?

Again, applaud the Warriors organization for this.

MAN, THEY BROKE THE LEAGUE BEYOND FIXING!

I'm also not a proponent of this narrative. Am I tired of Cavs/Warriors? No. And the ratings from the previous NBA Finals proves that many weren't either despite this complaining.

The NBA's history is one of the same teams having success, and the same teams squabbling to one day break through. See: Lakers and Celtics history. Everything in between is simply meddling in either direction.

The Warriors haven't broken the league, they've merely tilted the entire damn thing on it's head and said, "beat us". And you know what, I love that.

Besides my love for the New York Knicks, I also enjoy much fandom success with the New York Yankees. Yeah, those guys. You know, the team who goes out and gets solid (and even great) players added to their already great team.

The goal right now should be for everyone to WANT to beat the Warriors. And every night they play this season, they will get everyone's best. The NBA gets a wrap for the regular season not meaning much, and you know what? That's partially true before Christmas. But you can bet whether it's the Rockets, Lakers, Celtics, or Kings, Hawks, or my Knicks, the Warriors better come to play every night. Every. Damn. Night.

That's not breaking the league in anyway.

I MISS WHEN COMPETITION EXISTED

I kind of do too. This sounds rather hostile in nature, but I love as a fan when teams genuinely dislike one another. I'm talking the kind of dislike where you aren't fraternizing before, during, or after games. That physical, grunting, sneering, sometimes excessive, kind of intensity that makes for a great competitive and entertaining contest. Maybe it's the pro wrestling fan in me. But those storylines drive such great entertainment and drama. It's one of the reasons I appreciate Russell Westbrook and that bulldog mentality he has and plays with.

And I'll close and the Jordan comparison door before it becomes ajar - I also liked that Jordan had guys come play with him and refused the opportunity for any of his friends to don rings during their retirement. I'm on board with that kind of gritty competition. I like that kind of pettiness in my athletes.

But it's a different time now. I'll repeat, different time. And we're partially to blame with our ridiculous over-analyzation of "legacies" and the be-all-end-all qualification of how many banners you helped raise to determine thus legacy.

However, where I think the game and really, the competition, has now moved to is upstairs in the front office, and on the floor of your practice facility. Scouting, player development, and drafting is as important as it gets in today's game of basketball. Knowing the skill set of each and every player, unlocking those skill sets, and dare I say, keeping those players happy, is more important than it's ever been.

and of course, not giving stupid contracts out to players who aren't deserving. See: Charlotte Hornets.

Nothing wraps this up more than GM Daryl Morley of the Houston Rockets for me. Every GM and owner in the NBA should think like this:


ACHIEVED THE PINNACLE OF "WINNING CULTURE"

We hear it all the time from executives, coaches, and personnel on all levels of sports - "we want to install a winning culture. Well, the Golden State Warriors have probably achieved the pinnacle of this, the kind never really seen anywhere before.

If we really want to be honest, the foundation of this Warriors team is that very excellence of player development. They drafted the core of this team - Klay Thompson, Steph curry, and Draymond Green. We forget that Draymond Green was a 2nd Round pick. We forget the development and effort put in by Warriors medical staff personnel to get Curry healthy after a few down seasons, and now, KEEP him healthy. And of course, the development of Klay Thompson in a system that benefits him.

Then were the signings of Andre Iguodala. They took a flyer on Shaun Livingston. And yes, then went big game hunting in adding Kevin Durant and now Cousins.

This is an organization and player personnel who are in tune. A team that is unselfish, loves playing together, and will even sacrifice personal gain in money, fame, and ego, to dominate the NBA. It's the reason now that anyone - EVERYONE - wants to be a part of the organization.

In an age of guys saying they "want to win", yet wanting "their own team" and all of the other bells and whistles that come along with it, this is a group that has walked the walk when it comes to the "I just want to win" cliche" from some athletes. Staying at home, and making the league come to them.

They've established a culture that anyone in professional sports would want to have.

A nice little comparison are the Oklahoma City Thunder, who once had Durant, Westbrook, and James Harden. Think about that. And that's an organization, lead by Sam Presti, that is does business correctly. Just imagine what could have been...

Building what the Warriors have is extremely difficult. And rarely seen.

The moment Boogie found out he was a Warrior 👀

They weren't many offers out there for Cousins. I don't believe he received "zero offers" as he claims, but GM's weren't exactly jumping to offer a usual malcontent star coming off of a severe achilles injury premium dollars. And honestly, I wouldn't either. It's too much of a risk that could've cost any league executive their job.

But at the mid-level exception, in the right environment, in a situation where you're not dependent on his return, why not? And who fits that description more than the Warriors do?

All in all, I'm not going to get crazy over this. Who knows? There is a chance this doesn't work. You still have to play the games. But when it's all broken down beyond our love for our own teams (and the misery we expect to be in due to lack of hope - ala my Knicks, oy vey) and our fallacy of an expectation of parity and equal competition, you have to give the Dubs their props on this.

They just added a fifth All-Star to their team - fifth!

How can you not applaud the Golden State Warriors?