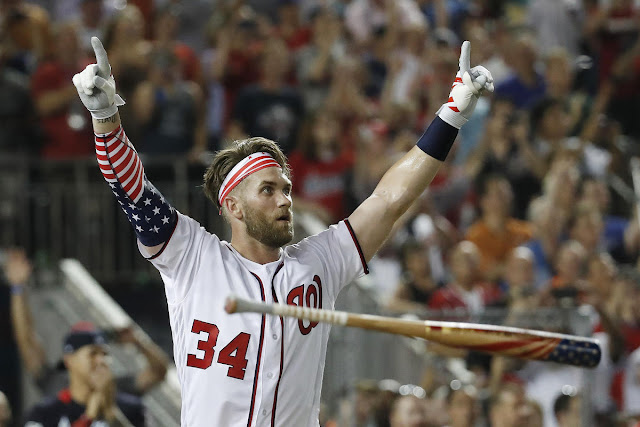 1. U.K. Supermarket - A supermarket in Britain has committed to one hour dimming the lights, sounds, and everything that contributes to sensory overload to allow customers with autism to shop. I love everything about this, as we all - all of us - often place ableism on the back burner of the equality fight. So much respect for those in leadership at Morrisons.

2. Home Run Derby - How awesome has the derby been since switching over to the timed format? Another HRD provided us yet another great moment with Bryce Harper's 60 second onslaught to win the crown. And oh yeah, Cubs fans need to calm down on the complaining/nit picking of the rules. It's supposed to be fun, folks.

3. Dwayne "The Rock" Johnson - The Brahma Bull (can us pro wrestling fans still call him that?) according to Forbes is now the highest grossing actor in the world. $124M! The Rock has come a loooooong way. Even before pro wrestling, it's hard to imagine the dude once had just $7 to his name. Chase greatness, y'all. It is possible.

1. Donald Trump - Do I even need to explain that debacle and disaster in Helsinki? Even worse? Those that are still attempting to defend the poor performance and obvious - being compromised by Putin. Blahhhhhhh...

2. Missouri Boat Tragedy - So, so heart breaking. Such a freak accident now has rendered many gone, including one family completely torn apart with multiple fatalities. Again, so tough to hear.

3. NFL - How clueless is this league? It's rather remarkable to see these owners go about so many avenues to appease the President, and of course, what they believe is the cause for declining ratings, rather than simply addressing why this all started in the first place. And no, not about the anthem, about inequality and oppression of people in this country.

1. Larry Fedora - Here is a college football coach claiming that less football will contribute to the "decline" of the country. Also, this same coach dismisses links between football and CTE. Ummm, alright. SMH. I guess football coaches, gonna football coach with all that tough guy brovado until the very end.