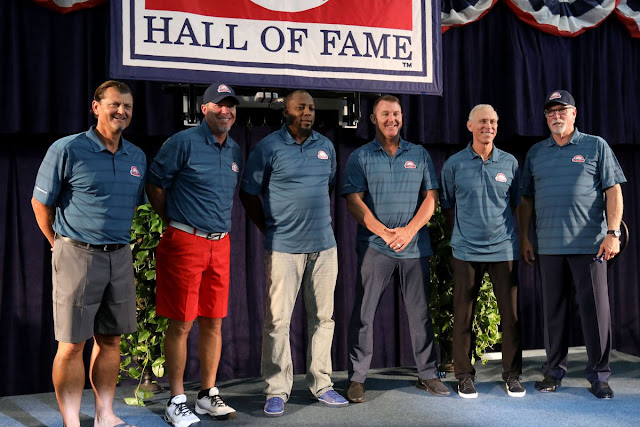 1. Anne Hathaway - You know what's the best weapon against racism? Allyship from the majority group, specifically, yes, white people. And being a white mainstream celebrity isn't too bad, either! Kudos to Anne Hathaway for speaking out on the unfortunate situation of Nia Wilson, and on the privilege at play in our daily lives, and in our society. More importantly, the way such privilege offers different psychological pressures, and ultimately, a different lived experience. A different America. But I think we know this. It's really who chooses to accept it.

2. LeBron James School - Say whatever you want about his basketball legacy, what LeBron has done in the spectrum of social justice, in giving back to his community and offering access for the youth in Ohio is incomparable and immeasurable. I'm a fan of this dude. And yes, I appreciate that he doesn't "just shut up and dribble."

3. Hall of Fame Inductions - Six great ball players went into Cooperstown today. Even scarier is that we're at the point where many players I've seen are now going in. But that's life. Regardless, next year should be fun - MO GETS IN! Of course, I can't wait for January to see who doesn't vote for the guy.

1. Nia Wilson - Imagine being stabbed out of no where for being a person of color. SMH. I just simply echo what was stated above. My heart goes out to her family.

2. Les Moonves - What is wrong with these dudes? Even scarier? How rampant is this stuff throughout the corporate and entertainment industry?

3. Freedom of Press - Politics aside, no administration, regardless of party or even the integrity of the network involved, should be removing access from the press based on personal preference. Not a good look. And definitely not within the Constitution.

1. Batting Practice Jerseys - It's downright comical of the Braves announcers who were outspoken over the "appearance" of the Dodgers during their batting practice. Even more comical are those trying to defend it. My opinion - what the Dodgers were wearing were fine, especially when NO ONE WEARS BP TOPS MID-SEASON! I don't need players, especially the road team taking BP first, in uniformed gear three hours before game time in the middle of the Georgia summer. The seriousness to which baby boomers place on the game of baseball is suffocating. Lighten up!