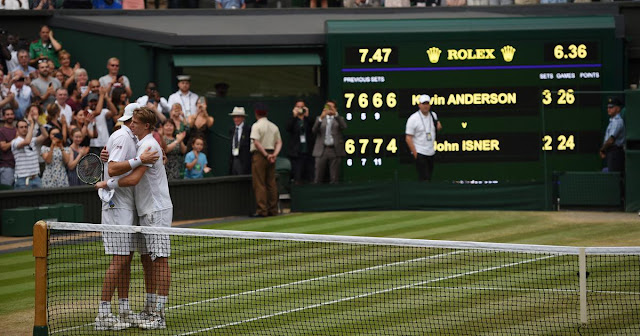 1. Thailand Boys Rescued - This story was captivating, and even becomes downright addictively intriguing when you really get into the research methods used to save these boys and their coaches. And let us not forget some of the fatalities that occurred to get this done as well.

2. World Cup - How absolutely phenomenal was this event? I'm already sad to see it go. With a newborn in tow for myself, I watched so much of it, and it all, was so, so, so good. Best in my lifetime, for sure. Congratulations to France - albeit via immigrants of African nations. But that's a different message for another post on immigration hypocrisy.

3. Isner vs. Anderson - 6 Hours and 36 Minutes. Just as great as the World Cup has been, Wimbledon was just as fantastic. Isner and Anderson provided an absolute classic.

1. Papa John - This dude is an absolute clown. This story is such a reminder of how these scenarios only result in action due to public backlash. And of course, how recording, and public awareness has changed handling of such things. Anyone think this guy hasn't spoken this way before? And really, that this isn't how he has been for years? Plus, my opinion - the pizza sucks. Always has.

2. "Fake Media" - Is news slanted and distorted more than ever as of late? Yes. But our President eliminating sections of the media and only catering to others who unconditionally support him is rather ridiculous, and actually, quite dangerous. There is accountability that comes with the Presidency, and openness and free press is part of it.

3. Emmett Till Case - I'm torn on the recent reopening of the Emmett Till case. Quite frankly, it's appalling how this isn't mentioned more as part of the fabric of our history. However, finding justice for a family that has left this earth, and charging a woman who claimed to have fabricated it all after she has lead a free life just feels too-little-too-late. Really, it just feels more like American guilt- well, more so, white American guilt, more than anything else.

1. Hulk Hogan Returns - Blah. See: Papa John. I've been done with Hogan for years. I get the WWE's reinstatement for historical purposes and of course, revenue purposes. But, blah. Not interested. Go away, brother.