Hogan, Hader, and the Unknown 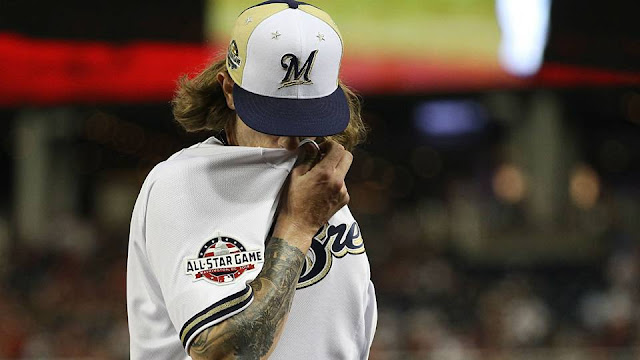 Is prior racism forgivable?

It's a loaded question and one that seems to have presented itself in the ever-evolving battle we have in our country. When do we allow and validate a person's change of heart from the the depths of previous discriminatory behavior? The question is an interesting one, especially when blended with the likes of white privilege and an underlying (thick) layer of foundational and systemic racism in this country.

When the stories of Hulk Hogan being reinstated to the WWE and Josh Hader's controversial tweets from his teenage years made their way to the public forefront, it was an interesting dynamic in which left me very curious on how our society would approach the different social issues. I found myself thoroughly intrigued to watch the response, the reaction, and the fallout.

Both men, at one time, regardless of when, stated nasty things. We're not talking about easy shades of ignorance and stereotypes, or even daily microaggressions that can be filed away under obliviousness and/or privilege. We're talking instances where Hogan used the word "nigger" in the very manner it was created, and Hader, who sent out tweets proclaiming "white power", "I hate gays", and other expressions that can be classified as Twitter being just a slice of the American pie.


Of course, both have expressed sorrow and have asked for forgiveness for their transgressions.

And for the record, pulling no punches, and all the other cliche slogans to express 100% truth - I find myself forgiving Hader, and not Hogan. Why? Allyship is everything in social justice. Hader has had numerous teammates and coaches - many, people of color - who have voiced dissappointment, but, support for Hader's current character.

Hogan, hasn't, and really, many wrestlers of color had no reaction at all to Hogan's locker room apology. In fact, many have made careful statements toeing the company line while distancing themselves from wrestling legend.

But as always, we have to ask, why are we so easily forgiving for such instances? We all make mistakes. We all have our faults. But racism, something that can be proclaimed as universally wrong in any ethical and moral spectrum, and can be identified and addressed at an early age (let's stop with the "kid" excuse), are so easily given a pass. Many would argue, the hurt and damage - and really, the seriousness of it all - doesn't equate to the passe green light given.

It all just reeks of privilege in which a majority tells those who are oppressed once again how to feel, and what constitutes the effects of racism, and who dictates the pardoning from that transgression.

I'm not suggesting to drop the hammer on those guilty of such hate - because, yes, that is exactly what it is. After all, people do change. And if we can't allow change in people, we can't expect change in our system. In our society. In our country.

But with that said, it is sentiments like the WWE's easy reinstatement and restoration of his career (with no asterisk or comment), and the city of Milwaukee giving Hader a standing ovation - and not exactly sure for what? - that hinders true change. Especially when Hogan's get-out-jail-card was that of "being careful what you say" (and not true change) after being outed in a recording, and Milwaukee feeling the need to applaud Hader on his first outing after his apology.

Again, I'm not going to get on a soap box here, because I honestly don't know the where the threshold is. What I do know is this, we shouldn't need "gotcha moments" and public pressure for punishments accountability on those who show racist and discriminatory expressions. Nor should we hold those same people as noble and courageous in their apologies for such expressions.

Because really, what this all boils down to is that even in the guilt of racism - caught in the mud of it's disgracefulness and shame, the oppressor still gets to dictate the forgiveness, and truthfully, gets off easy.