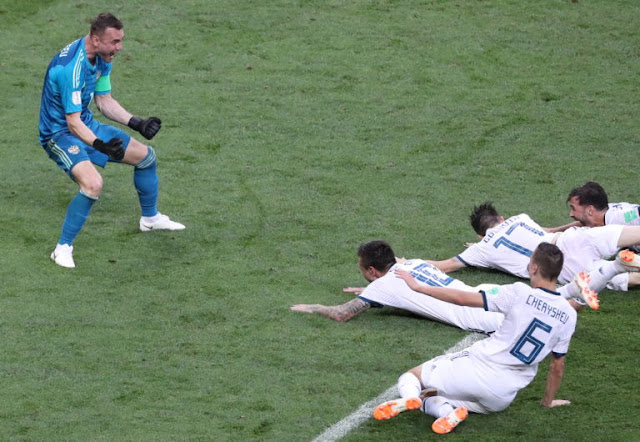 1. Allen Crabbe - Pro Athletes at times can get such a raw deal in terms of their generosity and philanthropy. This is one of those cases where even the harshest critic of the pro athlete has to give it up. Crabbe donated a significant amount of money to his high school in order to keep the doors open. Big fan of this story.

2. World Cup - I Know LeBron (with help by ESPN) tried to steal the thunder away, but EVERYTHING about the World Cup right now is absolutely riveting. With all of the upsets and new stars within soccer emerging, the event is the best one I've witnessed in my lifetime thus far.

3. LeBron to LA - As much as I'm jealous for the Lakers and Celtics who never seem to have long stretches of hard times (just this Knicks fan complaining), it is nice to see LeBron making decisions for him this late in his career. All the best out West. And now, the East is wide open...Come on Knicks, let's make a run!

1. Maryland Newspaper Shooting - Just another mass public shooting in America. So incredibly sad how numb we are to these. It's quite sickening.

1. Call Police on 8 Year Old - Seriously, we wonder why the relationship between police and people of color in this country carries such a distrust. Part of it stems from white people, in their insecurities, calling the police for ridiculous reasons. This is just yet another case. SMH.

2. Retired Supreme Court Justice - Look, I'm not bothered at all about Justice Kennedy's retirement. Or even the fact that Trump gets a selection. I'm afraid of some of the things being bantered about regarding opposing affirmative action among others. It probably won't happen, but who knows with this administration.

1. ESPN - The coverage and love fest with LeBron this weekend was nauseating. Even the clip of LeBron's plane landing in LA ala OJ Simpson -type-of-coverage. Even the continued pointless banter from their "experts". Nothing was more eye-rolling than the bottom scroll notifying you during Yankees/Red Sox than Stephen A. Smith was giving his take on the deal RIGHT NOW on ESPN NEWS. Eye Roll. SMH. Glad this is over...well, sort of. Oy vey.