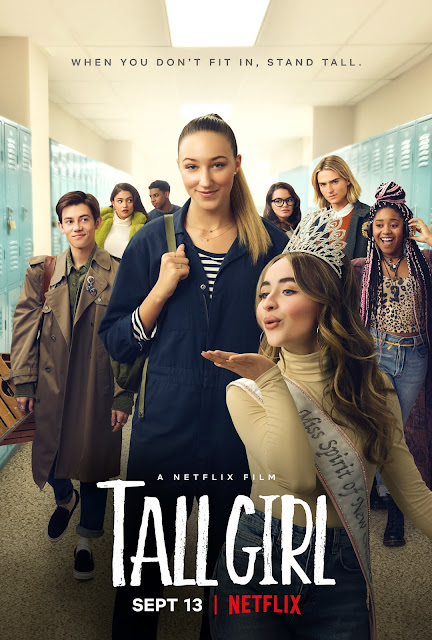 Jodi, considered the "tall girl" in her high school, deals with the confidence in being uncomfortable in who she is, and has always been.

While at lunch, Jack sits with his new roomates and those who are considered "popular" and ends up doing some pretty crazy impersonations to entertain the group.

"When you're a tall girl, it's the only thing people will see."

Tall Girl is just...weird. With plenty of disposable time over the holiday period that is the time vortex between Christmas and New Years Eve, the wife and I gave Tall Girl a spin one night after searching through Netflix.

I don't want to be too critical as Tall Girl does what we sought it out for - it entertained, but it can at times serve as background fodder while we attempt to put the child to bed. Tall Girl doesn't take much focus, as it is your basic coming-of-age movie dipped in the touch of adversity and overcoming personal marginalization.

And yes, as someone who is 6'5", there was a part of me that could somewhat...kind of...sort of, see the detriment in this film. But again, it's generic, it's there, and it didn't make you want to exit the Netflix app on your TV. And also, it's really hard to feel for a 6'1" girl who is indeed attractive, already has a suitable love interest to start the film, and seems to have a caring family. There just isn't enough to make me buy into rooting for the character to overcome and persevere with confidence.

By the way, Sabrina Carpenter and Angela Kinsley steal the show in this one.

Tall Girl is there. I'll let you make the call on this one.