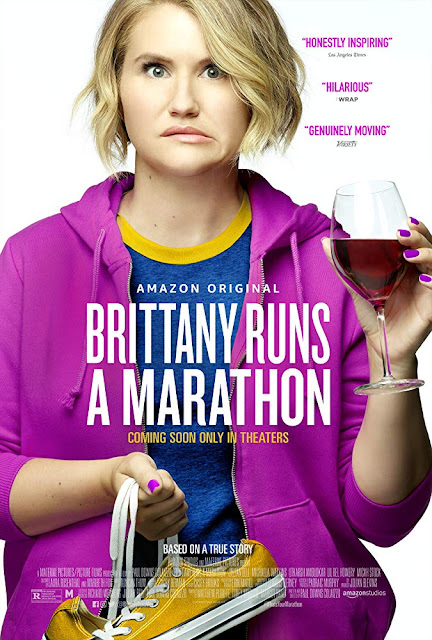 A woman decides to make changes in her life, starting with training for the New York City marathon.

While on the train to one of her races, Brittany is met by here former roommate and friend. They communicate, and through a play of words, is able to have some closure and a little bit of revenge during the interaction.

“I’m going to get rid of this girl because she keeps talking about Casey Anthony. Blek.”

Brittany Runs a Marathon, a production from Amazon Prime, is just, well...there. I'm not trying to be harsh, but this film really just left me where I started. This film is the epitome of not minimal emotional movement.

For me, the film just felt shallow. Yes, the story and otherwise morals and underlying nuances regarding life, making changes, and of course, what and how we appear to one another on the surface, is there, but this film never gets out of first gear.

The reason? The main character, Brittany, is just not likeable. You want to root for Brittany and this massive, gutsy, difficult transformation of losing weight, getting out of a rut, finding love, and coming into her own, but it just never appears presents itself. Brittany at times can be cold, mean, and often times, she is this way to the very people who are trying to help her. Quite frankly, if Brittany failed to run the marathon, I wouldn't have cared one bit.

Another reason for the neutral emotions towards this film is that the characters are very shallow. Brittany - another reason why I might not like her - has zero backstory beyond her bout with her weight and her confidence. Her new friends, especially Catherine, we learn of, but we never see their relationship develop - other than her inviting her.

Much like my review of Netflix's Tall Girl, this one was just there. The only difference - I didn't regret Tall Girl. At the end of this film, I was left empty. Not good.

Maybe you'll have a different take, but this one is going in the never again pile.