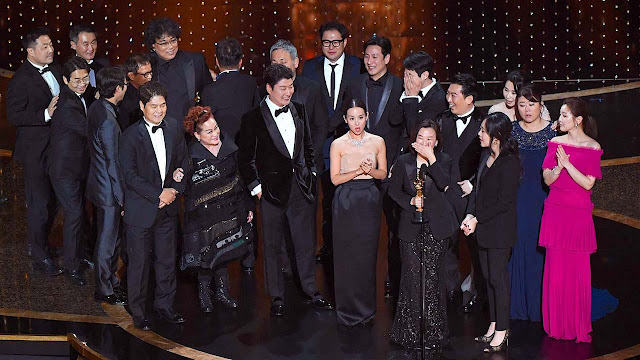 1. Parasite Wins Oscar - I haven't seen it yet, but now, I have too. Kudos to everyone involved with Parasite. The film made history at the Oscar's in becoming the first foreign-language film to win Best Picture.

2. Damian Lillard - Who averages over 40.0ppg in their last ten games? Seriously, who does that? Lillard has been straight ballin' as of late. Have you seen some of the shots he has take from the mid-court logo, earning the trending nickname of logo-Lilliard? The dude is incredible, and I am happy he is getting his due, and most of all, excited he wants to remain in a small market like Portland.

3. XFL - I work in sports, and one of the many lessons I've learned in the industry is that 90% of people look at sports from the fans perspective. Say what you want about Vince McMahon, but the dude is creative, and in many ways, a genius. It's great to see a content creator have a vision, correct mistakes of the past, and put that vision out for consumption. Many don't understand how hard it is to make those decisions, to create something new, and to develop and culture it. And of course, allow yourself to be available for criticism and ridicule.

I actually watched the entire opening game of the league, and I applaud McMahon for the changes to the rules to make the game fun, fast, and of course, safer. All the blessing to the XFL. There's more than enough room in sports.

1. SOTU Address - I've punched the keys on it this week. And as you can imagine, I thought it was an utter disaster. Because, it was.

2. Impeachment Trial - Did anyone - anyone! - really believe anything but an acquittal would come of this trial? If you did, why? Seriously, why?

3. Oscar's Diversity - Only one black nominee, and of course, it was for a move about Harriet Tubman. Be better, Hollywood.

1. Iowa Caucas - How are we still evaluating politics in these outdated procedures?

2. Fast and Furious 9 - I watched the trailer for F9 and everything about it made me scratch my head, shake my head, and of course roll my eyes. The series has gone bonkers. But riddle me this, and I dare anyone to debate this: how does a franchise series have close to ten installments, and yet, the original is still the best of them all?

Regardless, F9 will rake in hundred of millions of dollars. That's how it goes.