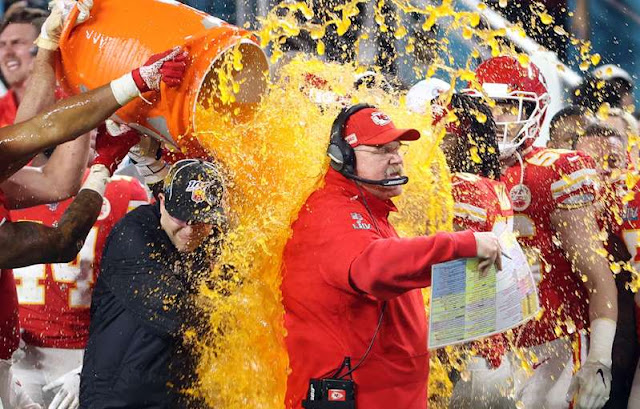 1. Andy Reid - I actually watched parts of the Super Bowl this year, especially so in the fourth quarter. Regardless, watching Andy Reid, after 21 years of coaching in the NFL, finally getting the big win was a nice touch on this Super Bowl Sunday. BTW, I still find myself cringing at specific hits and collisions.

2. NBA on TNT Roundtable - The way this crew and overall production handled the cancelling of the Lakers/Clippers game, as well as mourning the death of Kobe Bryant was absolutely fantastic. From the stories, the raw emotion, the questions, the insight - all of it really gave any viewer a look into the fraternity that is the NBA, while also allowing some of those untold stories to shine through in Kobe's honor. Again, the entire telecast was absolutely remarkable, and a must for any basketball fan.

3. Ellen Degeneres - So yeah, the story of DeAndre Arnold, a high school kid in Texas who is not being allowed to walk with his graduating class unless he cuts his dreadlocks, is rather ridiculous. Actually, it's very racists, but that's America. However, much props to Ellen who awarded the boy with a 20K scholarship to be used toward his college education. That's really cool of Ellen.

1. TMZ - Vultures. Absolute, vultures. The idea that they reported this story before the family of Kobe Bryant, or the families of the other 7 victims were notified of their deaths, is disgusting. Upon hearing this, I immediately thought of Princess Diana who had her like taken away because of the paparazzi. TMZ is scum, and it's amazing they haven't had more levied against their actions.

2. ESPN Roundtable - Yes, the ESPN basketball broadcast is a far reach from the TNT production. However, with that aside, the roundtable of Stephen A. Smith, Jalen Rose, Michael Wilbon, Paul Pierce, and Cari Champion completely ruined what was a chance to do something really special - the way TNT did. The crew absolutely dropped the ball with their arguing of winning championships, terrible stories of favorite Kobe memories, and flat out, poor understanding of the moment. It was that bad - cringy bad.

3. Jim Dolan - Oh, one of our favorite people here at the DP. Good ol' Jim Dolan had a 15 year old thrown out of the Garden who was joining in on the "Sell the team" chants. Oh Dolan...

1. Damian Lillard - Lillard's last five games have been utterly video game like. He has been balling, and it just goes to show you that there is something to be said about the respect of a star who stays with his team and wants others to join him. It's a different narrative, and one that is easy to root for.

2. Shakira and J-Lo - A fantastic halftime show put on by both ladies. Shakira is 43 and J-Lo is 50! That alone is simple insane!