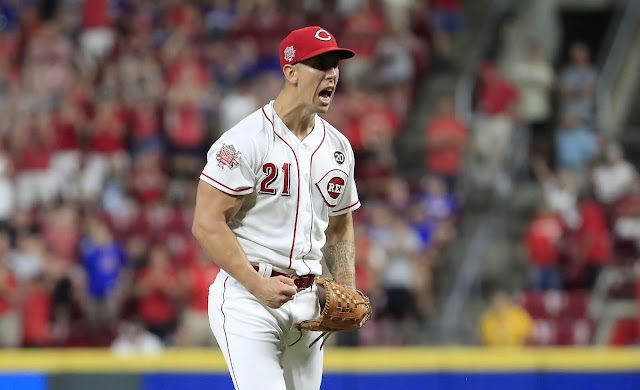 Rule changes and baseball never go over well. For some reason, the game of baseball and fans fight the process of evolution and the updating of the game for the next generation to come. It is why the game finds itself in the current transition struggle it currently is in - this sudden change from the way things "have always been" to what feels like extreme changes.

While the conversation always enrages many whenever there is a new rule change, the truth of the matter is, the game always comes around, fans settle down, and for the most part, the game is better for it (i.e. wild card additions - twice, expansion, replay, etc...).

Except for those released proposals for a NEW playoff overhaul.

Those my friends, can stay far away from the game of baseball.

Nonetheless, here are some quick thoughts on the latest rules changes for 2020:

Roster expansion: Each team will add one player to its game-day roster, increasing the number of active players from 25 to 26. Also, teams are not allowed to carry more than 13 pitchers.

Smaller rosters in September -- MLB is adjusting the size of September rosters to 28 players, including a max of 14 pitchers.

I love this. I honestly wouldn't mind expanding the roster to 27 and allowing another position player, but maybe I'm just being extreme. Nonetheless, in today's world of caring for the health of the players, especially when there is so much invested in them, having an additional option on the roster is a plus.

What I love more about this is the adjustment of the wacky rule (and allowance) that has been the 40-man rosters in September. I am all for the calling up of the top tier prospects to give them experience in The Show, but having ridiculously large active rosters, and teams making pitching changes every other batter in September made for some really tough games to watch.

And of course, the rule of having 30+ guys when the games mattered the most was stupid.

All pitchers -- both starters and relievers -- now have to face at least three batters (or pitch until the inning is over) before they come out of a game. The only exception is an injury or illness that prevents the pitcher from being able to finish his three batters.

I am torn on this. On one side, I am for it as it definitely will keep the pace of games going during those middle-to-late innings as things become dicey, especially in close games.

Also, it changes the strategy of the game, and places a supreme emphasis on the arms in the bullpen who are elite. However...

What I don't like is the the opportunities that will be now killed for those same elite arms. I'm talking about those days when some guys have logged long innings in consecutive days and are available for maybe one or two batters to help lockdown a win. Now, that window is altered as they'll only be able to close an inning, and the majority of those situations will be too late, or insanely high-leverage.

RIP to the LOOGY. Those left-handed one-out guys are now extinct.

A "two-way player" -- someone who both hits and pitches -- is now an official designation. That lets them stay on the roster as a position player and pitch in games without counting toward their team's 13-pitcher pitcher limit. If you designate someone a two-way player, they have to stay that way through the end of the year.

Well, the term "two-way" player is no longer just a basketball phrase. I LOVE this. Why? Because, for some reason, pro baseball is the only level where this doesn't happen. Little League, High School, Summer Ball, College - all of it - you will see players play a position and pitch.

Regardless, as the idea of two-way players such as Shohei Otani and Michael Lorenzen become more common, getting ahead and giving these players a designation, and also allowing their value to be utilized and advantageous, is a pro-active implementation.

POSITION PLAYERS ON THE MOUND

This one is weird. I honestly believe if a team wants to put their first baseman on the hill in the second inning in a tie game, well, that is their business. I get this one, I really do. But, it seems like simply placing a rule on something that generally happens within these boundaries, anyway.

Injured list: The current 10-day injured list will be for position players only. Pitchers and two-way players cannot be activated from the injured list for 15 days. And pitchers optioned to the minors must remain there for at least 15 days, unless there is an injury to another pitcher on the major league roster.

Seems like a rule to prevent teams from using the injured list to skip a start, or to manipulate the system. Going back to the 15 days mandate is at least two starts for a pitcher, which in the long run can hurt for those in-between injuries - enough to cause you to skip a start, but not serious enough to warrant losing for half the month.

By the way, I would love to see them add this logic to suspensions. 5 and 6 game suspensions are not equal for starting players and everyday position players.

Video challenges: Managers will now have 20 seconds to decide whether to challenge an umpire's call. They previously had 30 seconds.

For real, I'm not one who finds instant replay to be a bad thing. It is obvious by watching baseball in today's modern way that there are plenty of bad calls that change a game. Calls that ought to be corrected.

However, the way it is used in baseball - waiting, checking, then signaling to the umps, just to have them stand there with headsets on, as we all watch replays at home and in the stadium, then the umpires break with a signal of the official ruling - with no explanation of why. It's all dumb. It really is.

I get the reduction to 20 seconds, but come on...it's the same thing, with less time.

Here is my suggestion, each team has two challenges per game, and only - ONLY - the players on the field can signal for a replay. This will eliminate the crazy amount of players asking for replay challenges when they know they were wrong; it makes the the decision instantaneous; and get this...it eliminates cameras and video rooms inside of the dug outs!

You know, I'm sure you've heard something going around about live feeds and sign stealing...

And of course, to finalize it all, I want the crew chief to explain to the stadium and at home, what the call is, and why it was made - ala football referees.