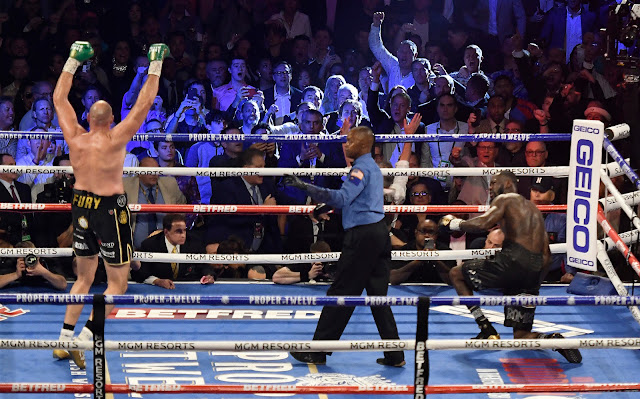 1. Boxing - If there is a sport that hasn't evolved in many ways, it is that of Boxing. Regardless, the sport won the weekend with an epic fight between Deontay Wilder and Tyson Fury. Not only was the fight anticipated, but it delivered with entertainment (those entrances!!!), it gave us a remarkable story (more on this in a few...), and it sets up a few other storylines and fights that even causal fans like myself would be interested in. Good job, Bob Arum.

1A. Tyson Fury - Not only did he give us a tremendous comeback story, but Fury also gave us a particularly interesting rendition of "American Pie" in the post-fight. Fury now is a household name, and probably the most notable household name in boxing outside of Floyd Mayweather.

2. Dagmar Turner - This story is so freakin' cool. Turner played the violin through her brain surgery so surgeons would not damage her musical abilities during tumor removal. Everything about this story is fascinating and remarkable - including the work of those surgeons who go unnamed.

3. David Ayres - Can you imagine being forty-two years old, driving a Zamboni machine, and being the emergency goalie for an NHL team to suiting up and getting the W for the Carolina Hurricanes? Well, it happened this weekend. This is the kind of story that makes sports so awesome.

1. Coronavirus - Well, just when we thought the virus was dying down, it has now spread to South Korea with many cases, as well as in Italy where the country is now ceasing their Carnival festivities in fear of the virus spreading.

2. Rise of Cancer - In the sad but very obvious category, the latest report has cancer cases set to rise over the next twenty years in poorer countries, or regions of vast inequality. The reason being that these areas are exposed to high-risk factors. So sad. So incredibly sad.

3. Bloomberg Debate Debut - Damn. Bloomy got jumped big time in the Dems debate this past week, including Senator Warren who really pinned him to the wall in regards to Stop and Frisk and his non-disclosure agreements. While he retaliated with straight-forward answers, the comment on "women not liking his jokes" was VERY cringe-worthy. Then again, I honestly can still see him winning the ticket - which says a lot about the Democratic party right now.

1. David Ortiz - I get what Ortiz is trying to say in regards to Fiers, and maybe the timing of his whistle-blowing after leaving the Astros, and really, upon returning to the AL West with the Athletics. However, are we really trying to blame Fiers here? Like, really? Really?! Honestly, it's just a bad take. I'm sure if Ortiz were on that 2017 Red Sox team that the Astros dispatched of in the ALDS, he would have a much different outlook.