Reaction to the 2020 State of the Union Address 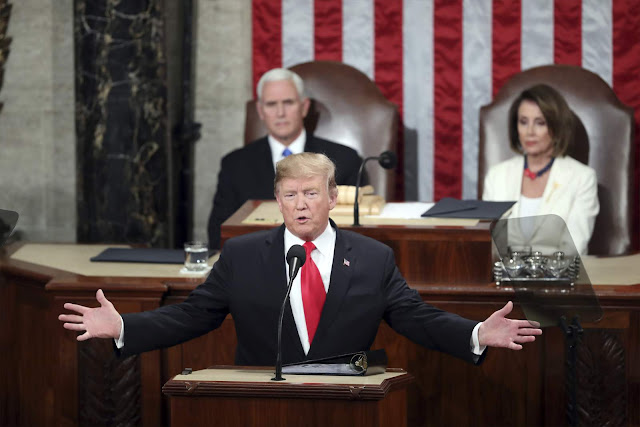 I may have just watched the worst State of the Union address in my lifetime. And I really mean that.

No. That isn't a shot at Donald Trump, but rather a statement at the atmosphere that is our political stream and space as of today.

Off the heels of an impeachment hearing that looked, felt, and seemed rather pointless in terms of what it would do (and really, we all knew what would happen), the SOTU was delayed, giving the country just a week or two extra to prepare for President Trump's final speech heading into an election year.

I haven't come across anyone who believed the trial would result in the removal of Trump as President. However, what it did do is further divide a nation that is probably as separated and antagonized in its thinking, again, more than any other period in my lifetime. The entire impeachment ordeal thing felt like a giant SMH, and in many ways, a WTF.

I wish the dems would focus on 2020. After all, as of right now, this year is looking very much like 2016 - a lot of uninspiring feelings for the political process, and the candidates before us.

Regardless, here are a few quick thoughts on the latest SOTU address:

I'm not sure if it is because I am older, because of Trump's love of hyperbole, or because my experiences have beaten the naïveté out of me, but I am always fact checking these speeches. And doing so along the speech, as it definitely shapes the narrative as it is happening - ahhh, the wonders of DVR and modern television.

With that said, one of the things that have bothered me about the Trump Presidency is in fact the false ownership of accomplishments, and even so, the media's inability to tell the truth (on both sides). Some of the common, well, ummmmm, "mistruths", claimed by the President that really annoyed were the following:


Again, I really don't need the lies. If you're not a blind loyalist, it really hurts your ability to support him, and furthers the divide.

I say it every year, but this speech in particular really didn't do him any favors - President Trump is the worst orator of all the President's in my lifetime. He is great in his rallies, but in formal settings, especially - ESPECIALLY! - when he needs to hit pathos or elements of deep emotion, he really struggles. At times, it comes across as VERY awkward.

The President really pushed the focus on black people, huh? At mid-speech, the rhetoric and intent reached the level of college-brochure/recruiting type of conspicuousness - and people of color know exactly what I mean by that.

The use of Tuskegee airman, single mothers, and more, to appease a community that he knows he needs, and that both parties know, will give them the election, was indeed smart, but rather, too late. Honestly, it s the kind of insult that comes with race and politics in this country. And at this point, both parties have only served to use people of color to gain the office, and have never reaped the benefits of the power from said office.

Win or lose - I will definitely be looking to see the black vote in this upcoming election.

I get the frustration with the President. On this blog, that is clear. However, the actions from the Left during the SOTU was annoying, childish, and quite frankly, reached levels of disrespect. The gaffing, the staring at phones, and at times, random shouts interrupting the President's speech, is the kind of reactions which really placed a light on where we are in this country, and the vast gap in cohesiveness between the two sides.

Despite the differences, there still needs to be a level of decorum and respect - if not for the President, for the sake of the SOTU, and the message that Americans are awaiting  and listening to at home. The anti-establishment tone the Dems are taking hurts no one else but their party, and overall image.

We're at the point now in the USA, where we are ripping up speeches of other officials. I don't find it disrespectful to the actual speech, or the people within the speech as the White House Twitter attempted to drive home. Much like the section above, it just spoke to the utter ridiculousness that is going on in DC.

Nancy can be frustrated, or even feels disrespected by the snubbed handshake (another nonsense tactic), but come on...

GOT THAT SPACE FORCE MONEY

Besides ridiculous uniforms which make zero sense due to the mission of the branch, I find this to be an example of one my favorite Tupac's lines - "they got money for war, but can't feed the poor".

Is Space Force a ridiculous idea? In many ways, yes. I do applaud the forward thinking though, which doesn't happen much from the Right. With that said, Space Force continues to tell me that poverty in this country is a choice the government makes, and prefers.

Keeping people in poverty is a choice this country makes every day.
— Clint Smith (@ClintSmithIII) January 15, 2020

Nothing like going hard after black viewers early in the speech, and then, hitting that same targeted demo with a moment of awarding Rush Limbaugh the Presidential Medal of Freedom.

By the way, the fact that Limbaugh is praised for anything - anything! - considering his past, is nothing short of bullshit.

THE DIVIDED STATES OF AMERICA

Of course, my biggest takeaway from this speech - and well, everything that came along with it - is the deep divide that currently exists in America. I knew Trump's presidency would bring out an underbelly that still existed in America, and truthfully, has existed since her founding. And whether many want to discuss it or not, I knew the years after the nation's first black President would be that in attempting to "revert" the country back, somehow - anyhow. Hence, "Make America Great Again".

But honestly, I never thought this nation would be this divided. And I still believe it's rooted in the racism that we have yet to truly deal with in terms of social responsibility and policy making, but also in our inability to understand empathy, and that there are many definitions of Americana, and what this country represents to us all.

I often wonder when thinking about politics, if this country truly did split, with all conservatives living in one America, and others living in another America, what both countries would look like.

And for you smart asses - save your civil war jokes - I can feel them already coming.

Nonetheless, it's going to take someone special to seal a divide caused by the first black President of the United States and a President who has carried that divide even further. Who will that be?