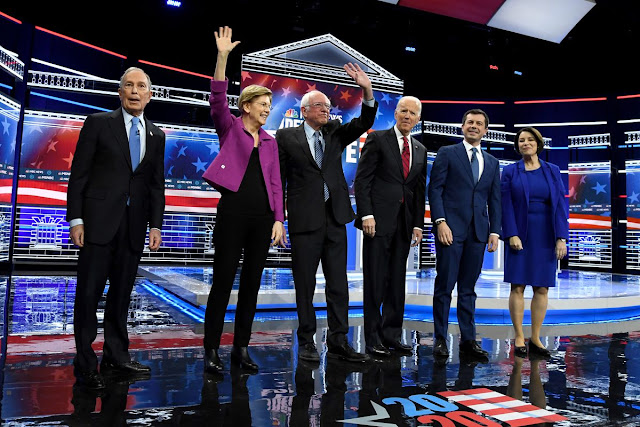 I've found the 2020 Democratic Primary race to be highly fascinating. Yes, at times it has bordered in annoyance (some of the Debates), but overall, the race has been an enduring one that really has battle-tested candidates for good (ability to clearly explain plans, prior decisions, and political positioning), and for the bad (the way money, fear, and social identifiers can affect a candidate's survival).

From this blog, and hopefully, by now, you can tell that I am a fan of pro wrestling. Quite frankly, this Dem race has all of the makings of your classic Royal Rumble - waiting to see who will be eliminated next, and of course, who the next surprised entrant will be - yes, looking at you Mr. Bloomberg.

Yet, with all of this said, as someone who is a registered Independent and finds politics in our country to be at it's absolute worst during my lifetime in the current state, I'm locked in. And naturally, life's experiences have also given me more at stake for this election - many topics which were once on the lower end of my importance, have now become salient.

With that said, as we approach Super Tuesday, and what should be a big day for the Dem ticket, here are some quick thoughts - just MY thoughts - on the candidates remaining:

In all seriousness, Bernie's star continues to survive and shine in this race. And there are more and more people who seem to be coming around to Bernie's ideas. And while they once seemed wacky, It really feels like the idea of universal-anything, isn't as negatively received in the light of "socialism" as it once was. Unless of course, you're a boomer republican.

There is a definite and growing understanding of a place for universal healthcare, and improved (and maybe even free) higher education within our capitalistic society.

However, I still find Sanders to be too far left for my taking. I'm not one of those individuals who is agonizing over a candidate's ability "ability to beat Trump" in reaching moderates. I really am trying to focus on their valid candidacy. But if we are given Trump vs. Sanders, for me, that is extreme vs. extreme. And that decision will be tough.

I know Sanders Supporters love his steadfastness on his topics, especially when it hits home on many topics for us Millenials in terms of equality steps, wealth gaps, insurance, student loans, and various other issues our generations faces, but again, I have a hard time agreeing or seeing that type of environment for our country.

I'm for the implementation of better healthcare - of the more affordable kind. The "free" discussions are tough ones for me - especially when it comes to education - it has to be paid for somehow.

And there is also this - Sanders has been in Washington for years. He's not some maverick that will change DC, the way Trump could honestly run his platform on in 2016. The dude has been there for a while and has had his votes attached to some bills that do contradict his messages and movement.

Here is my simple take on Joe Biden - he is profiting off of the nostalgia that was the Obama years. How many times have we seen him during debates take credit for the policies that worked during those years, but shun responsibility for those that did not under the former President?

Biden seems like he wants it both ways, and really, in some weird way - he's getting it.

My gut tells me Biden wins the whole thing. He has built-in support. He has money. He has a Washington infrastructure. And yes, it's been talked about so heavily as a crucial component to winning 2020 on both sides - he has the black and brown vote. Biden definitely has that.

If Joe Biden was someone else, in terms of what we have gotten thus far - lousy debate performances, poor explanations reasonings for his past, and most importantly, headshaking evidence for future plans - that person would have called it quits by now. Or have been forced to do so.

But Biden has cash, a name, a gripping history, and is indeed charismatic. Plus he's Obama's boy.

And if there is anything an American feeling the gravity of the Trump administration, it is that of longing for the days of Obama.

It's a shame, I really grew to like Buttigieg towards the end of his campaign. It is one of the reasons I dislike the debate format used in politics. Often, the lesser-known candidates have very little time to truly make an impact. It is one of the reasons I've grown to love the Town Halls featuring each candidate that CNN hosted this past week. It allows the viewer to grasp the authenticity of the candidate in their mission and platform, as well as give real voters the opportunity to ask questions that are similar to what most Americans would ask.

Buttigieg has my interest for the future. 2024?

Warren reminds me of a smart, charismatic, and caring mom. You know the type...

In another weird analogy, she also reminds me of the one white teacher that captures the hearts of all the black and brown kids in school, because she's dope, naively and unintentionally funny, but woke AF. If you've been there, you know the type...

What keeps me engaged with Warren throughout the entire campaign is this: she never waits for a question on race to discuss it. She inherently understands how race, oppression, power, and economics are entangled in so many of the United States' issues. It's a rare thing to see in politics, because, quite frankly, it's always from the perspective of white men.


The way Elizabeth Warren speaks about almost every issue - whether it be the environment, healthcare, income inequality - & lifts up the experiences of Black ppl is so important. She doesn't wait for the "race" question bc she recognizes the way racism is entangled in everything.
— Clint Smith (@ClintSmithIII) February 20, 2020

However, with that said, because of the above trait, I find (and maybe it's proven, not sure how long Warren lasts) that many won't find her appealing enough for those on the fence to come on over to.

It's very unfortunate because Warren also seemed like the only one with true transparent plans for many important issues.

I'm not sure what it is or has been regarding Klobuchar in this race - I just could never once dive into her as a candidate. Like many, I think she had to fight for time on the debate stages, which is unfair, but she also never gave me anything that engaged me to want more of her in this race.

Tulsi Gabbard is in the same boat, but even Gabbard had some moments of intense fire that made you wonder, "OK, I want more for her".

I just don't know what it was, I never got that from Klobuchar - even when she brought great ideas, and the occasional humor.

I never once had any interest in Tom Steyer. Seriously, none.

Gabbard is the wrestler you peak into the upper right corner just to see them on the floor, clearly hurting, breathing heavily, yet, holding themselves up by the bottom right, becauuuuuusssssseee...damn it, they're still in it!

And Gabbard still is.

Here is the thing for me with Gabbard: again, I never got enough from her in the debates because they just never went her way. And that is unfortunate because, from the time allotted to her, she brought some serious fire.

I don't see her lasting too much longer in this. But it was a nice enough run to leave her name in the national spotlight for future attempts at the Presidency.

I'm familiar with Bloomberg as a New York City resident, and lifer.

Look, Bloomberg was indeed, overall, terrific as Mayor of New York City. Yes, he has some major mistakes, but following 9/11, and of course, the mess that was the 2008 financial crisis, Bloomberg was the right person at the time to lead the City through that mess.

Stop and Frisk policies will continue to haunt him through this race. And it will come up, time and time again. Because yes, it sucked. And it is unforgivable, especially for a Mayor of a city. And it still has lasting ramifications in many neighborhoods in this city. And in a race, whereas noted, the black and brown vote will be vital, that my friends, is a death sentence.

If there is anything that working-class black and brown folks can't deal with, are white, super-rich, politicians who continue to push the wheel of systemic racism and oppression while in power, and offer lame apologies when they need something from the community and culture.

I just don't see it. Then again, we have Donald Trump in the White House, and that at one point seemed unlikely.

I guess I would be REALLY surprised.