Thoughts on George Floyd and Everything Else (Part IV) 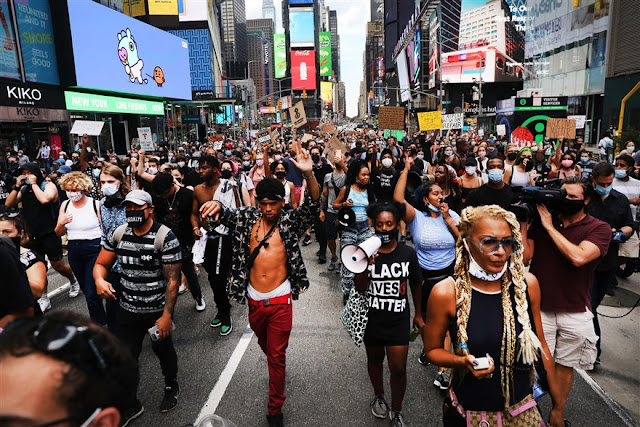 I've decided to keep this thread of posts going, because, after all, here we are again.

Thoughts on George Floyd and Everything Else

Thoughts on George Floyd and Everything Else (Part II)

Thoughts on George Floyd and Everything Else (Part III)

This time, it's the situation of Jacob Blake in Kenosha, Wisconsin.

Seven shots in the back - from within two feet.

That was justification to apprehend what was to be believed as someone of threat. Seven shots. In the back.

Because you know, he was a threat - or maybe, it was his skin that was - the greatest weapon of all in this country that is America. Regardless, we're at the doorstep again of unrest and backlash. And yes, hearing the same old rhetoric and narratives of why THIS one doesn't count.

Why doesn't he comply with the officers!

He was carrying a knife!

Being imprisoned for crimes you've already paid your debt to society for qualifies (and justifies) you for death by a police officer. Imprisonment, in this land of mass incarceration, is the ultimate qualifier, for your life no longer matters - regardless of reformation, or sometimes, of crime committed.

The same type of action that includes being killed by a police officer - again, seven shots in the back - are covered.

We've obeyed and complied - like we teach our children and loved ones in THE TALK many times before. It doesn't matter. See: Philando Castille.

"He was playing with a toy gun in the park"

"Her boyfriend, in his home, with a legal gun, fired upon them while they were sleeping..."

"He complied and reached for his license and registration"

"He looked suspicious while running through our neighborhood"

It happens over, and over again. And no one cares. Because no matter how many times black bodies drop by the hands (or guns) of those who are supposed to work for us, or those who take the law into the comfort of their own hands, there is always an excuse for why it happened.

The boycott we saw that spilled across the sports world this week gripped my attention. Not because I love sports, but because it levied on the type of action and moment that we read about from the 1960's Civil Rights movement - using available power to dictate change.

It's the kind of action I never thought we would see. After all, for so long, the realm of sports, especially in the case of black America, has always been viewed as one of the limited pipelines for extreme social mobility and generational wealth - especially for black America. It has always carried a label of black America are privileged to be a part of this multi-billion dollar industry. We see, read, and hear it every time an action or sound byte makes waves that ruffles this exact structure.

As someone who works in sports, but also has a rare intersectionality occupation of working alongside the inequality that takes place in education, I've long believed sports commodifies black bodies - sometimes not intentionally, but very much by the decision-makers and consumers. Black bodies are loved on the court inside the colors of an audience's favorite team but shunned or discarded beyond donning that jersey.

To me, that's what made this so special. Players realized the power they hold within this structure of sports. We're so consumed with it - we need it, crave it - it's very much a part of us. All you have to do is harken back a few months during the height of stay-at-home orders to see how starved we were for sports.

When the players walked out, even as a fan, an outsider, as a consumer, as someone who as no inside tracking of what was going on - you sensed the panic from the league, from television executives, and yes, from fans.

Opposers once again found their "but" citing similarities to employment and "showing up to work" and of course, pulling from the "these players are spoiled" tree. But no matter how much they tried to paint the athletes in a negative light to justify them playing to fulfill their need, what was visibly apparent was the concern and realization that yes, sports could be pulled away by these players. That has power. That carries power. And many are afraid to admit it, but having that leveraged against their political and racist disregard really makes this base uncomfortable.

It carries so much power. No basketball. No baseball. No, whatever it is that many throw their fandoms - their lives! - into. That bothers America.

Sports has done more in 2020 for humanity without even playing games.

What the NBA was able to get was remarkable. The WNBA has always been and continues to be the standard-bearer for being proactive.

I was utterly surprised to see that MLB - a league historically so conservative in approach - joined in. Dominic Smith of the New York Mets and his emotional presser still rips at my heartstrings. Baseball games not happening, yes, that triggers a lot of people.

Naomi Osaka, the number one ranked tennis player in the world forfeited her semi-finals match.

And so many more.

I know many are hoping this "stuff" doesn't enter the NFL's sphere. Because that - now, that would be really messing with Americana.

Sundays WITHOUT football? We've already been down the mash-up of politics, social justice, and football already - spoiled millionaires disrespecting our flag!

I'm sure the mere thought of it already has many annoyed.

And finally, nothing else deflated my hope for sensible dialogue throughout the country - building off of George Floyd - than that of the rhetoric of Tucker Carlson stating in reference to 17-year old Kyle Rittenhouse opening fire and murdering two protesters:

"he simply maintain[ed] order when nobody else would"