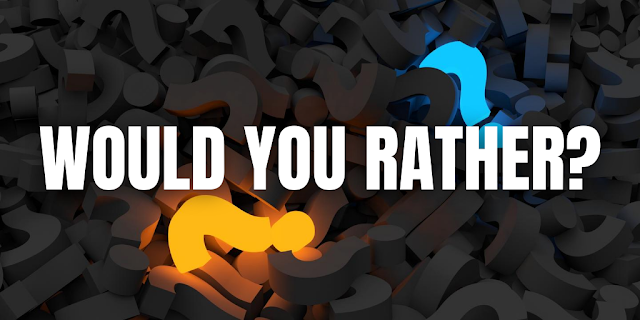 121. Who would you rather have on your favorite NBA team - Giannis Antetokounpo or James Harden?

Seeing how I'm a lifelong suffering Knicks fan, the thought of any of these guys in blue and orange is hard to believe. With that said, I'm taking the Greek Freak for this reason - I enjoy watching him play a bit more. Nothing against Harden who is amazing as well, but at times, the ball sticks and that isn't always fun.

Plus, I feel like we haven't yet seen a finished Giannis.

122. Would you rather have Giannis Antetokounpo with no driving ability or James Harden with no Three-Point shooting ability?

This is definitely a weird and unique one, but I'll take Harden. Giannis without his strength doesn't offer much. However, if Harden's deep shot isn't working (or is non-existent), he can still work with a mid-range shot, and can still beat you off the dribble for the drive.

123. Would you rather have Joel Embiid or Karl-Anthony Towns on your favorite team?

Call me crazy, but I'll take KAT. Joel Embiid in NYC just feels like it wouldn't work, and wouldn't last.

124. Would you rather build around Ja Morant or RJ Barrett?

125. Would you rather see rookie Jordan in today's game or rookie LeBron in the '90s?

Oooooooh! This is highly intriguing, but really, such an easy answer. Young MJ in today's game would be utterly ridiculous. With his athleticism and the open play, he would be tremendous to watch. LeBron in the 90's would still farewell, but I would prefer watching a more polished LeBron in the 90's.

126. Would you rather have LeBron and Durant or Kobe and Jordan for 5 years on your favorite team?

I'm taking Kobe and Jordan on the Knicks ::: takes self not for fantasy scenario in NBA 2K:::

Obviously, KD and LeBron are right there, but I just can't see a team losing with Kobe and MJ. Regardless of who their teammates are.

127. Would you rather get crossed by Shaw or blocked by Muggsy Bogues?

Both are obviously embarrassing. I'll go with Shaq crossing me up.

128. Would you rather have Kemba Walker or John Wall?

I'm sure this is going to have some people roll their eyes (or maybe not?), but I'm going with Kemba Walker. I've always been a fan of watching him play since his days at UCONN.

129. Would you rather have prime Jason Kidd or Prime Steve Nash?

Prime Jason Kidd - all day. Kidd was special to watch how he impacted the game on both ends. Nothing against Nash, but I'm taking prime Jason Kidd.

130. Would you rather bet your life savings on the Dream Team or the Redeem Team?

Redeem Team. I know we all love to romanticize about the Dream Team, and I'm partial to that team as well because it was the first, but there were some dudes on that team not exactly in their prime (Mainly Magic and Bird). The Redeem Team was orchestrated and built with the purpose of dominating - reclaiming ad redeeming USA Basketball. The names on that roster were all at a high level and facing competition much more advanced than the 1992 Dream Team.

So yah, I'm going Redeem Team. Don't come at me.