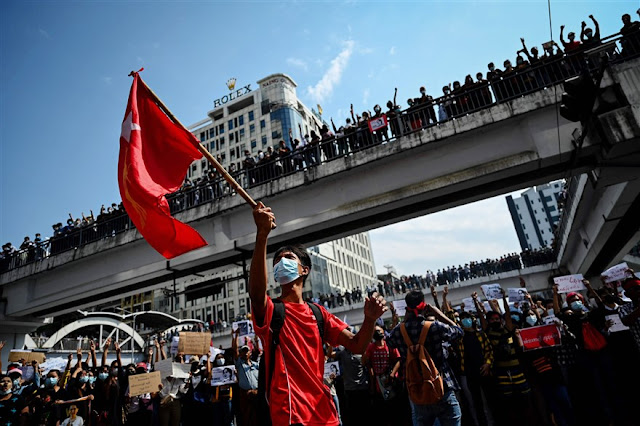 1. Law Enforcement at the Capitol - The footage we saw during the impeachment hearings, especially that of the newly never-before-seen footage, was tough to watch. At the same time, it provided even more appreciation for the efforts taken by the law enforcement presence during the riots, as well as lengths of their injuries and mental challenges since January 6th.

Some of the footage of Eugene Goodman was downright heroic and pivotal to what could have escalated to another level of tragedy. The video of him running by Senator Mitt Romney is one that continues to prove that.

2. JJ Watt - I don't know what is going on in Houston - it seems all of their household sports names are leaving town. Add JJ Watt to the list who released a video via Twitter this week explaining to the world his request for a release from the Texans, and of course, his appreciation for the city of Houston. Watt is a class act, and the kind of athlete you want in a franchise representative.

3. NASCAR Daytona Diversity - The Daytona 500 was this week. Michael McDowell won this year's race in a fiery final lap. However, getting the "up" is the debut of 23XI Racing, owned by Michael Jordan and Denny Hamlin. Jordan becomes the first black owner of a NASCAR team, and we also saw Bubba Wallace become the first black driver to lead a lap at the race. It's a small step (and shocking considering the firsts happening in 2021), but diversity only helps the sport move forward.

1. Cuomo Numbers - A huge egregious act by Cuomo and his administration. A recent New York Times article reports that Cuomo's administration downplayed the amount of COVID numbers (and deaths) during the beginning of the pandemic. Cuomo's office responded with the defense of being in fear of Trump's administration, which is rather ridiculous for a leader who claimed to "not be playing politics" on the issue. Not to mention, the writing and cashing in of a book.

Again, not good. At all.

2. Myanmar Protests - Protests continue in Myanmar as the world watches their military attempt a coup by removing elected leaders. The situation continues to be fragile to the state of democracy for the country and provides unrest through the region. The people of Myanmar have undergone internet blackouts, curfews, and other measures to control the people from rising up against the coup. It remains an interesting story, especially considering the few parallels to what we've experienced in America.

3. Impeachment Acquittal - It's tough to maintain faith in our government leaders when "politics" and positional power is more important than accountability for what happened at the Capitol. Unfortunately, it's not surprising.