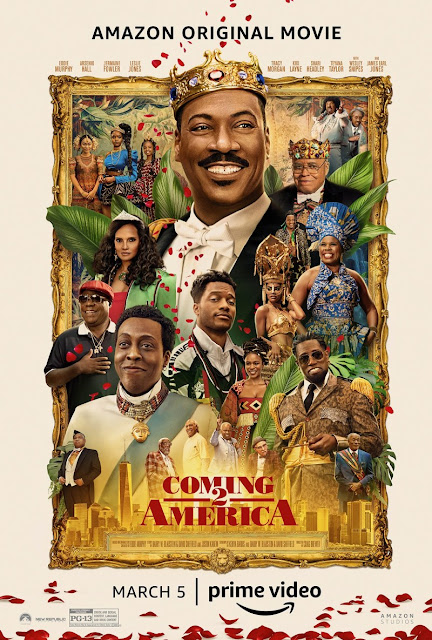 Prince Akeem learns that he has a long-lost son in America as he is set to become King. He journeys to America again to build a relationship with him and prepare him for the position of Prince.

After things unravel for the newly crowned King Akeem, he is found in the Zamunda McDowell's mopping the service food area.

Akeem: Prepare the royal jet. We are going back to America!

Semmi: Oh, hell no, your Majesty!

Everything that I feared about the creation of this sequel in Coming 2 America came true - everything. In fact, after watching the film, it left me very upset about the legacy that was and is the first film. Not because it ruins it, but because there now will forever be an asterisk in any conversation of Coming to America - you know there is a sequel right? Ah yes, the bad sequel asterisk.

First, the positives: the film does a tremendous job with nostalgia. Bringing back as many actors and characters as they did was awesome. Also, visually, the film is indeed miraculous - especially that of the choreography and costume design.

Unfortunately, what really sinks this film is the plot, followed by the lack of depth of the characters. Relying on old characters is nice, but the film did nothing to establish the new characters, specifically Lavelle, Akeem's long-lost son, and all of his daughters. The plot seemed all over the place and thus, made the scenes feel forced for comedy, or re-copying the first film - which ended up feeling overdone by the latter part of the film.

Selfishly, the plot also ruined the character of Prince Akeem, and everything that was his pure pursuit for love and a different life. The original film felt ground-breaking from stereotypes of African people, whereas this one threw the identity back into the box.

I was hoping for a film that was geared around Akeem and Semmi returning to Queens 30 years later in a modern world much different than the one that changed their lives in the '80s. I was also expecting a plot twist of the "son" being that of Semmi's on the loophole that during the original film, he was telling others that he was "The Prince". Just me hoping...

I wanted more of Akeem and Semmi adventures in Queens and conquering America, than well...whatever we got.

So yeah, Coming 2 America was exactly what I feared - damaging to the awesome characters of the now original film, but also, just really, really, bad.

I just wished they never made it.