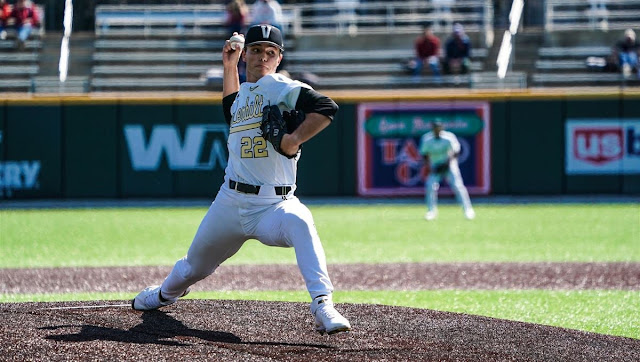 1. March Madness - Well, it was sooooooooo nice to see everything that is March Madness return, and the results and upsets have created quite a unique experience already. Sans the clear inequality of the Women's and men's tournaments (more on that in a bit), it is really good to see student-athletes competing, caring, and thriving in a somewhat similar environment.

2. Spring Season - Spring is officially here! And while that means warmer weather is on it's way, it also allows some movement for many who have been bogged down by quarantine and lockdown. The early numbers and data are immensely sad in regards to physical activity and overall physical fitness - I'm hoping the warm weather gets many moving and curbs some of the longer effects of health as we make ourselves out of this pandemic.

3. Jack Leiter and Kumar Rocker - Vanderbilt has two awesome must-see pitchers on their team. How can the College World Series NOT be a must-see this year? Also, MLB HAS TO find a way to draw storylines and interest out of this for their product.

And oh yeah, by the way, Leiter tossed a no-hitter this weekend. No big deal.

1. Atlanta Spa Mass Shootings - So incredibly sad. Our nation continues to wrestle with the underbelly of hate, racism, and white supremacy as a domestic terrorist guns down innocent levels for no good reason.

2. Southern Border Crisis - As President Biden makes his intentions clear for looser restrictions on immigration, the flood to the border has occurred, and the new President has his first crisis (that is his own doing) on his hands. Regardless, the stories are sad, touching, and powerful. We have to be better. Whatever the answer is, we have to be better throughout the world.

3. Inequality for Women at NCAA Basketball Tournament - There is no excuse for what we saw out of the comparables in various videos and images of the Men's and Women's tournaments. None. Our women athletes deserve better.

1. All-Black Hockey Line - The sport of hockey had its first all-black line on the ice since the 1940s. Sure, we can rip the sport for its lack of diversity because that is some troubling numbers to get into. However, looking at the positives, it's pretty cool. Really cool.