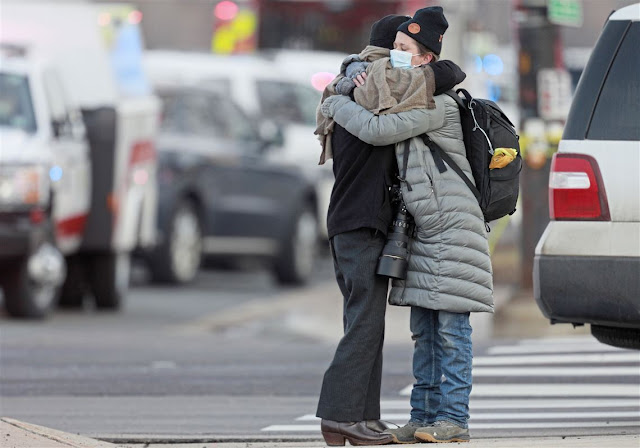 After everything that was the experience of 2020 - loss, death, and the suddenness of it all, we're sadly moving away from a once-in-a-lifetime pandemic that has halted our society, for a slice of unfortunate normalcy that are public mass shootings.

The continued underbelly of everything that is on the table of Americana is the saddened and alarming state of mental health within this country. And too often, we perceive mental health as issues surrounding those who are at the deep end of this suffering pool. You bundle that with social unrest, a continued heightened political climate, continued isolationism (intentional and the virtual normal), and an economy that slams the door on social mobility, and access to health care, and thus, we've got the result of a mixing of blame-reliance, finger-pointing, deflection, and of course, privilege.

And yes, all of it is now included in the unpacking of our mass shooting problem.

I'm not going to get into a gun control debate, political responsibilities, national lobbyists, or the interpretation of our Constitution. Because quite frankly, this topic needs no more layers to peel back. We know what the problem is.

And I've stated multiple times on this blog - once nothing was done following Sandy Hook, our priorities were made clear on the topic. Until something happens, what else is there to discuss?

In retrospect Sandy Hook marked the end of the US gun control debate. Once America decided killing children was bearable, it was over.

But, there is one more piece to add - especially in the wake of the pandemic, the mass shooting in Atlanta, and the latest in Boulder, Colorado - our accountability for life, the preservation of life, and the absolute precious gift that it is are non-existent at the core of this country.

This happens too many times. And we all know the solution. We do.

Until we get there, we'll be here, sadly, again.