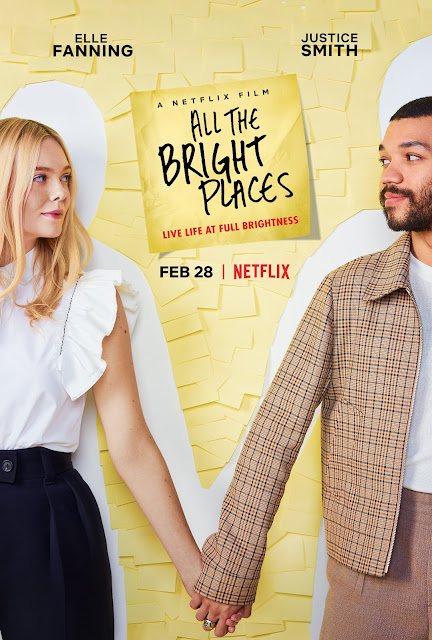 Two troubled teenagers meet and change each other's lives for the better - working through their past, and their demons, the two find meaning in the smallest and simplest of places.

Following the death of her sister in an auto accident, Violet does not like being in situations where she was not in control. As part of their project, Violet and Finch travel to a location with a small backyard rollercoaster, where she finds joy in its simplicity.

This one kept calling me on my NetFlix home screen. Yes, I also had it saved to "My List", however, according to my previous watches and guilty pleasures (yes, I'm a sucker for coming of age and lifey stuff)  I gave this one a go on a sick day.

I was happy that I did when the credits began to roll.

All the Bright Places has a tremendous message about living life, about not allowing your past and your demons to define how you live or even, how you restrain yourself in living. Of course, pursuing all the beauties that are out there - even the smallest locations, moments, or happenstance is a huge message too, as you can tell by the title. The film carried a very pain-is-inevitable-suffering-is-optional message. Again, I'm a sucker for these kinds of films.

However, my biggest recommendation for his film is this - it makes you feel.

It's so very obvious that the book that this film is based on is a much better engagement than the film - that's detectable as the relationship between Finch and Violet could have been deeper on-screen. But as the viewer, you get the idea. Books will always win these comparisons.

At the end of the film (I won't give away any spoilers in this review), I felt like I did know Finch more than Violet - maybe that was intentional.

Speaking of Finch, I'm not overly familiar with Justice Smith's work, but he was really good in this. Another winner from this movie was the music selection. Every song, every tune, and every sound was perfectly placed which added to the overall emotions of the varied scenes. Good stuff.

I'm not sure who puts this as "teenage romance" because it is far from. It's a serious film that touches on relatable issues, mental health, the spirit of life, and so much more. It's on a much bigger note than just "sappy romance". Give this one a watch if have the chance.