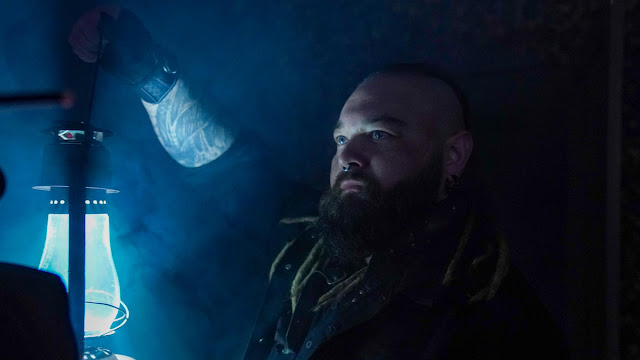 Never in my wildest dreams did I ever think as a young, teenage wrestling fanatic that the WWE would be better off without Vince McMahon. But in the year 2022, this very much rings true. Ever since the Chairman of the Board swayed his arms in that classic McMahon strut right out of the WWE, leaving Triple H, Stephanie McMahon, and Nick Kahn with the brass ring (how about that ode to Vince?), the product of the WWE has actually pulled me back in.
Heck, I watched RAW live, for an hour. Not the whole three hours, because, really, I still have no idea how some fans do that. Even if the show is good.
Nonetheless, much like all things that get a fresh coat of paint in pro wrestling, it becomes a hot commodity. Sustaining it is the challenge (see AEW for proof). We'll see how long this lasts, but for now, the WWE is once again entertaining, and that doesn't bode well for the rest of the wrestling industry.
I tuned into Extreme Rules, WWE's long-time nod to ECW with a night full of gimmick matches, that typically can get stale or be awesome. Good for them, it was the latter. WWE continued its winning streak with me in delivering an amazing show.
Here are some quick notes:
- I believe I've said this in previous reviews of the WWE as of late, but the "Premium Live Events" very much feel like straightforward in-ring action with payoffs to what has been happening on Raw and Smackdown. A part of me does miss the breaks for backstage skits and the occasional interview with the wrestler before heading out to the ring. But eh, such is the evolution in this pro wrestling industry. I don't think anyone produces pay-per...premium live events like that anymore.
- Extreme Rules in Philadelphia just feels like it should be an annual thing, right?
Also, a nice touch to have the voice of extreme, Paul Heyman, narrate the opening video package. 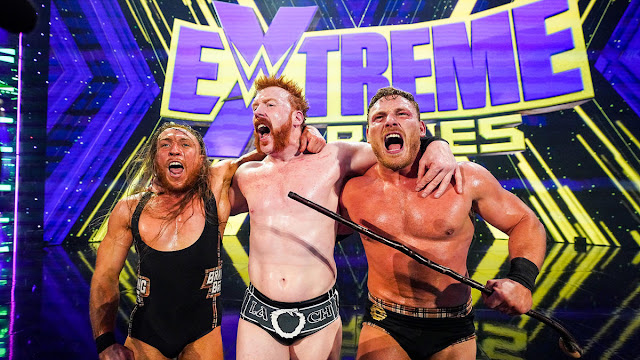 - If I had any doubt about tuning into this event, the opening contest between The Brawling Brutes and Imperium hooked me in for the rest of the night. Sure, the "Good Old-Fashioned Donnybrook" gimmick felt somewhat odd and a bit stereotypical, but it certainly added to the match, and this one just felt like a fight! It was chaotic in the absolute best of ways.
I'm such a huge fan of Gunther. And for Shaemus, the dude continues to be rock solid. Always.
- Triple H and his new administration certainly has won me over with the simple strategy of putting characters back in their best position to succeed. This includes Ronda Rousey as a heel. She's simply natural in the role, especially after the WWE rocket to the top that often rubs fans the wrong way when not done the right way.
I actually did enjoy this match, contrary to popular opinion. I just believe that sometimes the sloppy, drag 'em out struggle is more of a suspension of disbelief than much of the choreographed styles we see too much of in pro wrestling. Again, that's just me...
I've enjoyed the underdog story of Liv Morgan, and am very interested to see where they take her after passing out with a smile...which was awkward and interesting - I can't figure out which, to be honest.
- Another unpopular opinion - I think I like the idea of the Karrion Kross character (w/ Scarlett) more so than the Karrion Kross character (w/ Scarlett). I know that can be confusing, but I think I want more than really what can be given. It's a cool entrance. It's a cool character at times. Once the bell rings, I'm still not moved. He's a good wrestler. Just something is off for this fan.
Regardless, this one was another good bout. McIntyre, again, was solid. Not sure I completely cared for the finish, though.
Scarlett's gear...ahhhhhhhhh, wow.
- The WWE really does have something special with Bianca Belair. I'm not sure what her ceiling is, but it'll be a damn shame if she's anything less than megastar. Every time her song hits, and she comes skipping down the aisle, she just has "it". Not sure what that is, but no other wrestler (or Superstar - male or female) looks like her, has an aura like her, and feels like her. Complete uniqueness.
With all of my fanboying out of the way, Belair and Bayler had a good ladder match here that picked up as it moved along. As ladder matches go, this one was physical and both women laid their bodies out for this to work - and it did.
For what it's worth, the agents putting in spots for Belair to show off her athleticism and strength always pops me. Again, huge Belair fan here. 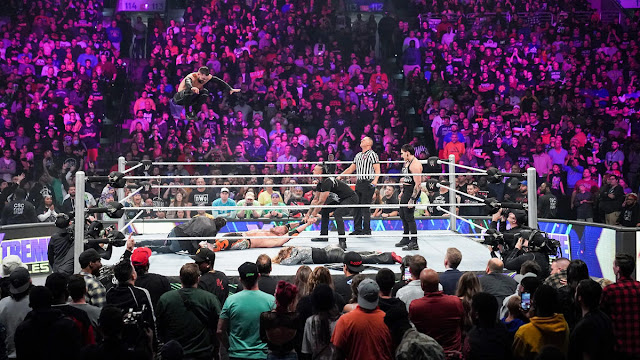 - Finn Balor vs. Edge was easily my favorite match of the night, just edging out the opener  (see what I did there? Ok, moving along...). Submission matches are hard to pull off, and in that realm are "I Quit" matches. You obviously lose the possible suspense factor with false finishes and a build-up, so getting creative is of the utmost importance in pulling them off. I loved the drama around this. This was done right.
For the record, I still think the origin of the feud is bananas, but it's evolved enough that I'm not sure I care anymore. You knew Beth was going to get involved, and when she did, it felt like all sorts of chaos which made for some fun moments.
Of course, Dominick Mysterio getting his receipt kick to the nads was nice. Again, kudos to creative on just turning him heel - it's working.
The final moments of Edge being held and forced to say "I Quit" to protect Beth were just great. His line delivery was also great there - kudos to Edge. The continued chair shot by Rhea Ripley was absolutely awesome.
I'm curious to see where this goes. I just hope we don't get "Brood" Edge. Because, well, I'm just not sure that's a thing. Edge just needs to be a pissed-off husband coming for revenge in a personal feud - not some cheesy gimmick he left behind to become a star, but goes back to in order to force an alter-ego character scenario.
Beth is involved. No need to become a vampire.
Yah...can you tell I despise "Brood" Edge? It's a cool theme song though.
- Speaking of theme songs, they just don't make them the way they used to, huh? 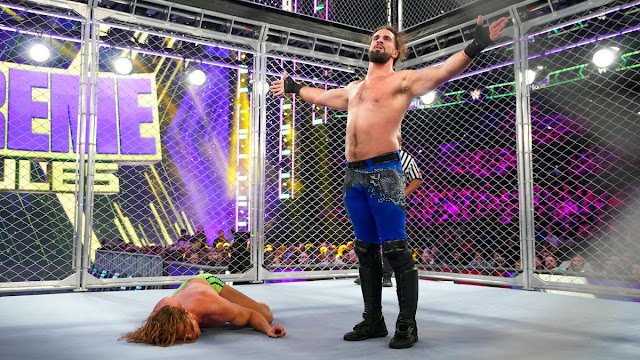 - I just never got into Riddle vs. Rollins. Again, it's hard to watch a video package of a guy calling you a "Bitch-Ass" and laying it in how your family left you, just to watch you smile and saunter out to the ring. I guess I wanted a different level of intensity that the video package emanated, that the match didn't.
It was still enjoyable but was just there.
Fight Pit is a cool concept, though.
- Of course, that was until Bray Wyatt returned. I don't need to explain how awesome that reveal was. I'm looking forward to everything that this could possibly be.
---
I'll be watching Raw on Monday. Wow...talk about a change for this fan.
Major props to Triple H. Keep doing that thing...whatever it is. It's working.
Photos Courtesy of WWE.com