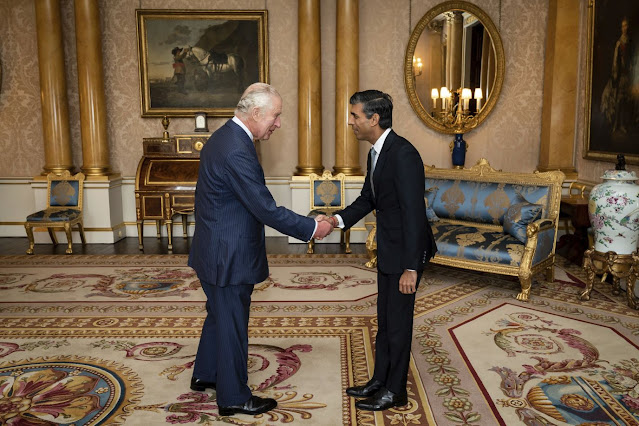 1. Rishi Sunak - The UK has named its new Prime Minister. Sunak is also the first Prime Minister of color. Sunak, 42, is also the youngest prime minister as well. Sunak is worth over $800 million as well (Damn!). It's quite an interesting pick to lead the union after a shaky year of leadership. Very different for the UK.

2. Adidas - Well, well, well. I honestly didn't think they had it in them to let Kanye out of his deal. Good to see there are some standards of morality remaining, even with billions of dollars at stake.

3. World Series - So far, this series has been VERY entertaining. Though my gut says not many are tuning in, I'm looking forward to a good series to cap off the baseball season.

1. Pelosi Home Invasion - What. Are. We. Doing?! Seriously. Is this where we're at now? Invasions and harm to those in office who don't align with your messaging? Scary times, ya'll.

How can we possibly get quality individuals to run for office with this sort of stuff coming with the job now?

2. Seoul Halloween Stampede - I'm still not sure I've been able to wrap my mind around the tragic event in Seoul, South Korea. A Halloween celebration turned into a stampede that killed over 150 (!) people, with hundreds more injured. Such sad, and extraordinary, stuff.

3. "Free Speech" - From Kyrie's post-game presser to everything that is Kanye West, to Elon Musk taking over Twitter, to just about everything in politics - the topic of "free speech" has not only jumped the shark but it's also become a phrase to weaponize opposition to wacky ideology.

2. Midterms - Of course - the next few days are going to be interesting (and annoying).

3. College Affirmative Action - Race in admissions will go under the spotlight starting tomorrow in the United States Supreme Court. I will be tuned into this not only with interest but also in working on a response to this for the institution where I work at.

Gut reaction - considering the different makeup of the Supreme Court than when it was passed in 2016, I fully expect race-conscious admission policies to be struck down.

King Charles III welcomes Sunak during an audience at Buckingham Palace, where he invited the newly elected leader of the Conservative Party to become prime minister on October 25.