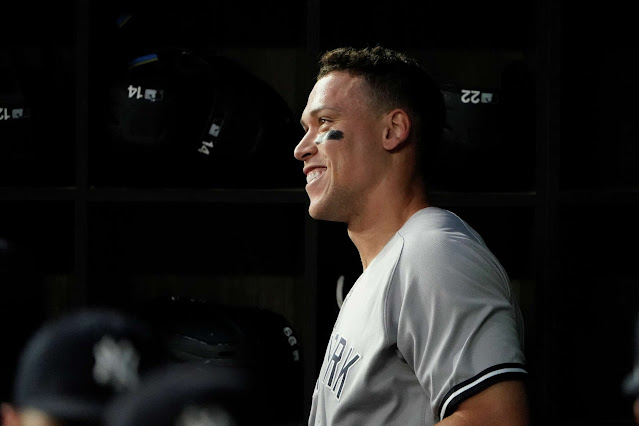 It's very easy to fall into the low-hanging fruit that surrounds what Aaron Judge pulled off in hitting 62 - SIXTY-TWO!! - home runs. What's the real home run record? What is your opinion? Who's the real home run king? You know, all of the hot-takes and forced debates that always seem flood to the surface and strangle the moments, accomplishments, and specialness in sports.
The conversation is valid, and it is definitely the fault of no one else besides Major League Baseball that we are currently in this position of deciphering records from *records. We've done the steroids discussion in every shape, form, arena, and angle thus far - nothing is going to change. We all have had time to plant our flag and get comfortable with steroids, the steroid era, and its place in the game of baseball's history.
Even the "American League Record" moniker, while fact, still had the feeling of reaching for legitimacy to combat the steroid gorilla in the 62 in '22 room.
For me, Barry Bonds is the record holder - we can't ignore history. And yet, even with that officially on the books, I still found everything about Aaron Judge's season and his chase of Roger Maris (the sequel) to be thrilling, amazing, and as must-see as Mark McGwire and Sammy Sosa's original edition in 1998. I, like everyone else, wanted him to get there.
61 was still special because it remains just that, special. It's still pure. And after Judge, the irony is, 61 will remain so.
Yet, what remains every bit impressive to me for Judge in this 2022 campaign was indeed the season as a whole - the best offensive Yankee season I've ever seen in my lifetime (move over A-Rod).
And even more so, what kept me coming back and stunned, was the unbelievable mental focus he sustained through this chase. In a world of social media, constant coverage, hot takes, doubts, scrutiny, drop-in coverage, and even yes, standing crowds at Yankee Stadium during his at-bat, Judge stayed the course. Through it all, his at-bats remained true, his mindset never seemed to stray out of what got him to this level, and the mounting milestones of 60, 61, and eventually 62, never felt like he was pressing, anxious, or overzealous.
Records and milestones made vulnerable beings of even the most immortal of figures the way we saw Derek Jeter pressing en route to breaking Lou Gehrig's all-time hits, and eventually, his own pursuit of 3,000 hits.
Not Judge. Again, Judge stayed cool. He also remained at an elite level of baseball I've rarely witnessed in my life. Sans say, Barry Bonds (go figure).

Sidebar: His mom's reaction to the record-breaking home run in Texas was one of my favorite things about this chase.
I couldn't imagine the pressure of staring at the calendar, needing a few more home runs, and dealing with the frustration of opposing teams no longer pitching to me. This chase was nightly appointment television, and every at-bat further displayed the true specialness of what he accomplished this year. That level of focus - I've never seen.
Judge would simply take his walks. Or settle for that RBI double which felt so lackluster in the moment. It was borderline machine-like at times. It felt like we collectively wanted him to get there, even though part of us knew it was inevitable. None of it felt like hope. Or chance. Just when.
My guy hit 62 home runs. 62! In an era of strict testing. After all, we all know the importance of this. And it will take a while for us to truly understand the new math in baseball that 62=73, in some, way shape, or form.
In 2022, I'll remember Judge, not for a guy who simply bashed home runs night after night, the way I remember McGwire and Sosa in 98, but for a year in which he took us on an elevator ride far above the norm, into a rarely visited, and for some, never seen before or witnessed, of the greatest mental competitiveness we've ever seen in sports.
Never before, and likely, rarely, if ever again. That's 62. To me, that's the truest beauty - and purity - of this accomplishment.
Photo Credit: LM Otero/Associated Press