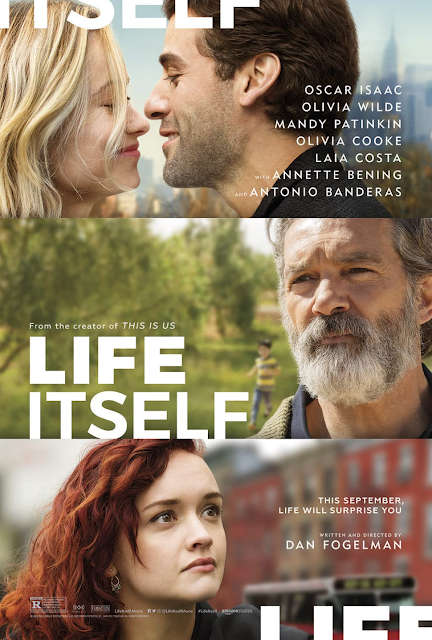 Who is in it?
The happenstance and journey of a young New York City couple cause a reverberation of several instances and effects that echos and effects several others through various generations.
What is it about?
Oscar Isaac - Will
Olivia Wilde - Abby
Olivia Cooke - Dylan
Sergio Peris-Mencheta - Javier Gonzalez
Laia Costa - Isabel Diaz
Antonio Banderas - Mr. Saccione
Favorite Scene:
The alternate scene from the original bedroom scene between Will and Abby shows a different version of what happened with the exact words used, just a different tone - indicating that life itself isn't the greatest narrator, and we all have our own versions of a story that is possibly part of a bigger story.
Favorite Quote:
"I crave a happy life, grandpa. I have an almost desperate craving for stability and happiness like fat people crave chocolate or lost hikers crave rescue. I want to live a big, great, fantastical life, but I am concerned that the tragedy that seems to follow me, the tragedy that birthed me will prevent that from ever happening."
Review:
Life Itself was an impulse watch in my basement while working out. You know, the typical "suggestion" from Amazon's creepy intelligence on your interests. I gave the mega big brother some more data agreeing to the film with interest, but initially as soft background noise if needed during my workout and minimal focus for entertainment. What I got was something much more towards the end in a film that served its purpose for my workout, but also, as a highly intriguing message from a decent film.
The main takeaway from this film is the thoughtfulness of life and the question of whether we are painting our own narration and story, the idea of our contribution being that of a hero or a villain, and whether we are possibly playing a smaller part of something much larger. Pretty much, life can be terrible, wonderful, and complicated, yet, beautiful all at the same time.
I know, I know...deep stuff. But the movie does a pretty good job of explaining and offering this up.
The movie does hit a weird turn in Chapter four, at times which feels like a complete turn away from Chapters one and two, but in the end, it does come nicely together.
Oscar Isaac was absolutely great in his limited role.
Life Itself is definitely much more than just background filler - definitely go out of your way to check it out. Go ahead, and give it a chance, it will not disappoint.
Grade: 3/5