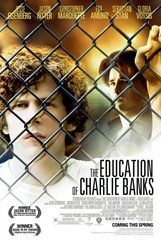 Charlie Banks, now a college student, experiences and must deal with old problems when the past he thought he escaped from in high school shows up on his campus, and teaches him what he cannot learn in a classroom.

After a past of ending each of his fights with a kick to the face which has killed many, Mick showed mercy, and was not able to do the same to Charlie.

“You can have a headful of the best ideas but if you can’t make the right moves in the world, they’re worthless.”

The Education of Charlie Banks is a film that is surprisingly very good. What is even more surprising is that it is directed by former Limp Bizkit lead man, Fred Durst.

The film gained many awards from the independent film committee, and deservingly so. From the excellent dialogue and great scenery, to the detailed characters, you truly get a feel for the situation that Charlie Banks is in, and most importantly the life lessons that he learns from his experience.

Jessie Eisenberg does a great job as Charlie Banks, a young, intelligent college student that connects with the intimidating Mick. Jason Ritter was just as complimentary as the hard nosed bully that learns about a life he never knew existed.

All in all, The Education of Charlie Banks is a smart and entertaining movie that pulls the viewer in due to its intrigue and unique plot. A recommended view.