Pride Hurts: The Fate of the 2010 U.S. Olympic Hockey Team 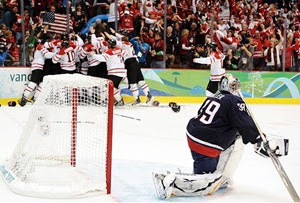 And probably for the first time in my life, I am saying that in reference to hockey. Yes, the United States vs. Canada gold medal game was one that made for great theater (or theatre, if you’re Canadian.). In fact, it was a game that felt momentous – something that would be looked back upon as we moved forward.
And with all of the national pride surrounding the game, the atmosphere itself had a certain aura that made it that much special. From the various storylines, the grand stage of the Olympics, the history between the two nations in the sport, and the greatest players in the world on the ice, the moment was there for the making.


And while I am no hockey aficionado, in fact I only show interest every four years during the Winter Olympics, I found myself attached and engaged in rooting for the United States team. As I watched, I learned more about the game, I gained confidence in placing names with faces, and I also wished that the NHL was this entertaining. However,  the greatest thing I came away from this game was the pride that players had in competing.In fact, what memorialized this game for me was the dejected face and attitude of Ryan Miller, the United States’ goalie. After letting the puck that signified much more than a Canadian win, but that of childhood dreams and American pride, get by him, Miller’s body language deflated, telling the story of disappointment and failure. 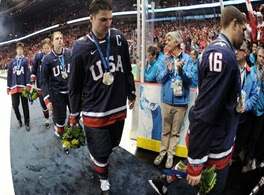 While I remember watching in disappointment as the United States soccer team was sent home early by Ghana in the 2006 World Cup, and that dark memory of my college roommate and I being utterly disappointed when the United States Baseball team lost to Canada, then were eliminated by Mexico in the inaugural World Baseball Classic, there was something more about the way the Americans begrudgingly looked at the silver medals around their neck.

It was a look of disillusionment. A look of disdain. As the Americans received their silver medal in front of thousands of fans waiting to erupt for their country’s gold medal celebration, the American face’s expressed that this moment was a permanent scar. Medals that will one day sit on their fireplace or in their trophy case as a stark reminder, not that they were an Olympian medalist – actually second in the world – but that they did not get the job done. That silver medal will always sit there staring back causing thoughts of what-if’s and could-have’s, while still carrying some of that disappointment from that February 28th day of 2010.