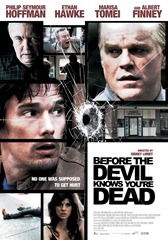 After two brothers organize the robbery of their parent’s jewelry store, their family is sent into a whirlwind of climatic events after the robbery goes horribly wrong.

The actual robbery scene where Bobby Lasorda goes in to rob the jewelry store and eventually leads to the shooting of himself and Martha Hanson.

“You don’t look happy. Mind if I call you “Groucho”?

Before the Devil Knows You’re Dead is a film that is very run of the mill. By that, it is very creative and very interesting, yet, has flaws that keep it from being something that is a go-out-of-your-way-must-see.

First, the positives. “Before the Devil Knows You’re Dead” is very creative. The entire story is told from the various perspectives of each character - pre and post robbery. The format allows for great character definition and refinement, especially in the second hour of the film where it focuses in on the troubled relationships between the family.

Adding to the positives are the great work by Philip Seymour Hoffman. The entire cast really did a tremendous job, but Hoffman stole the show as the sadistic, money hungry, troubled individual that was the catalyst to the entire plot.

On the other hand, the film’s drawbacks of unanswered questions and a questionable ending really hurt the overall effectiveness of the movie. Despite being a film that causes the viewer to think as it progresses, after it ends, which is very anticlimactic, it leaves too many unanswered questions. And not the type that leave the viewer with open ended situations, but ones that leave the viewer searching for reasonable explanations. Not good at all. A solid, maybe even surprising ending, is desperately needed in this film.

Overall, Before the Devil Knows You’re Dead isn’t a terrible movie. However, it isn’t a must see either. As said before, very run of the mill. A decent movie that is worth a watch if you have some time to kill.