Over a year ago, yours truly wrote a post titled, “Linked in More Ways Than One: Sabathia Can Influence R.B.I. Result on The Mound”. The piece touched on Sabathia’s opportunity to influence baseball’s impact in inner cities on a big stage like New York.

It’s been roughly fourteen months since that has been written, and the recent comments by Torii Hunter and personal experiences has sparked a review of Sabathia’s impact so far as a Yankee. Hunter, who has been very outspoken when it comes to baseball’s efforts of bringing the game to people of color in the sport, specifically blacks, made the following comments:

“As African-American players, we have a theory that baseball can go get an imitator and pass them off as us. It's like they had to get some kind of dark faces, so they go to the Dominican or Venezuela because you can get them cheaper. It's like, 'Why should I get this kid from the South Side of Chicago and have Scott Boras represent him and pay him $5 million when you can get a Dominican guy for a bag of chips?' ... I'm telling you, it's sad”

While, the issue of blacks in the sport of baseball has been a hot-button issue in the past decade and really not so much so moving into the 2010 season, Hunter has always been honest and forthright with his comments. And in this one, he was once again absolutely right.

Yes, they may sound harsh and direct in attacking Latin ballplayers, but the truth is just that – don’t confuse darker Latin players with that of blacks. Hunter, for lack of better words is saying, the issue of baseball lacking black participation is still there.

I’ve touched based on this issue several times throughout the history of the DP, and for the first time in a long time I believe there is some progress being made as stated here last April (Alive, Well, & Healthy: The Survival, Recovery, and Future of MLB).

With the likes of Jimmy Rollins, Ryan Howard, Curtis Granderson and the emergence of budding stars such as David Price and Jason Heyward, there are numerous faces that kids in the inner city can look to. However, non have, and has the most influence as C.C. Sabathia.

In fact, Sabathia’s effect can be huge.

Fourteen months since writing that original thought, C.C. Sabathia has gone on to contend for a Cy Young Award, have dominant playoff performances, and win a World Series title. All the perfect recipe for the beginning of what could be a huge attraction for blacks to the sport. 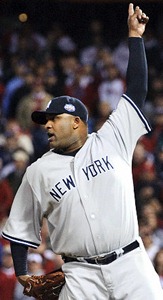 Sabathia recently commented that he waited one year to settle in and become comfortable in the New York – Metropolitan area before getting involved in the communities and promoting baseball through the Reviving Baseball in Inner Cities program (R.B.I.). This year, he begins do so by donating to the restructuring or building of new baseball fields, and hosting his own tournament.

Many claim that Sabathia’s gift of giving back and having an impact on communities that will begin this year should help make him much more marketable in the NYC area, as well as nationwide.

On a Saturday morning as clinics and practices are being held for the upcoming tee-ball, little league, and Babe Ruth seasons here in Brooklyn, yours truly has seen an influx of not only black faces, but number 52 Sabathia t-shirts, as well as an overwhelming sight of straight brimmed hats cocked to the side.

And the ironic (and exciting) part is, he hasn’t yet.