A Non-Hockey Enthusiasts Look at Interest in the NHL 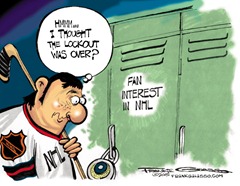 As the dust settles after an epic gold medal game  between the United States and Canada, the focus now turns to the question of how will the sport of hockey be affected. Sunday’s game produced a television rating of 17.1, which made it the most watched hockey game ever in North America. However, we know that Canada’s interest in the sport will be there – always have, always will. It is the American interest in the sport that is at risk. Finding a way to capitalize off of the interest in the Olympics is the key to this problem, and how that can be translated to professional hockey, and the National Hockey League.

Does commissioner Gary Bettman  and the NHL have a plan? That is yet to be seen. Although, future interest in the sport cannot be determined, there are a few suggestions as a non-fan of the NHL that could peak my interest.

Yes, I’m sure some will not agree with this idea. However, did anyone notice that there was not one fight in the entire Olympic tournament, and it was a rather memorial one? No other league condones fighting, why should the NHL? It is a cheap gimmick that is used to attempt to draw fans and garner exposure through highlights. However, guess what? It obviously hasn’t worked. It’s time to clean up the sport, quit the horse play, and present your league, your teams, and your athletes as serious athletes and not hired goons.

Sorry die-hard hockey fans, whether you want to believe this or not, no one knows who these great athletes are. Unfortunately, hockey is terrible when it comes to diversity, and with some player names that leave some wondering where to begin in pronouncing it, connecting new fans can be difficult. The NHL needs to get these guys out in the open. Learn from what David Stern has done with the NBA. Give us reasons to care about these guys. The NHL has the luxury of having two phenomenal talents in Sidney Crosby and Alexander Ovechkin who can be the faces of the league. They are true legitimate sports stars, with a real contingent following. For some reason, they seem more like trivia answers, than stars.

It can be a great sport, but unless there are faces that non-fans can connect with, it will be a tough sell to new fans.

I understand in today’s sport business era that the odds of such a concept occurring is slim to none, but reducing the amount of games in the schedule could help. One of the reasons that the Olympics were entertaining were because of the high intensity play. Additional suggestions regarding the schedule included statements made by various hockey experts, who believe the rather quick expansion of the league (9 teams in 9 years) watered down the level of talent across the league. From the structure of today’s NHL schedule, that type of play we saw in the Olympics can’t and won’t occur. 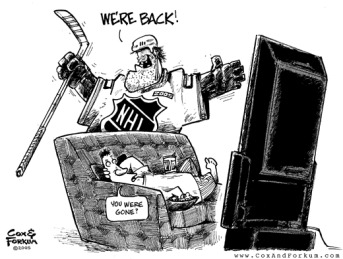 However, in it’s defense, the NHL is indeed in the middle of a steady incline since the days of its lockout. While boasting increases in attendance, revenue, and television ratings, the league has rebounded and is doing a lot better than popular opnion.

Even with their recent run of success, the league is still miles away from the giants that are the NFL, MLB, NBA, and heck, even college basketball and football.

However, I’ll admit, my view of the game has indeed changed due to the Olympic Tournament. As an avid fan of the movie, “Miracle”, I often wondered why the game couldn’t be as appealing as it was in the film. In the tournament, especially the gold medal game, it became that way. Fast. Creative. Physical. Intense.

And come playoff time, I’m sure I’ll tune in to NBC or Versus (Another reason why the NHL is never seen) to watch for a bit. Maybe an entire period if it really hooks me. However, the ugly truth is, baseball season is starting. March madness is brewing. The NBA playoffs will be in process. And the NFL is in draft mode. Those are the real reasons professional hockey is where it is in this country. And those are the reasons why fan interest in the NHL is so selective, so regional, and so minimal.

It’s not what the NHL doesn’t offer, its what the other leagues do.