Leaving The Building For The Last Time 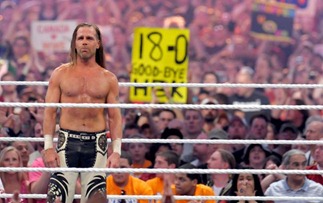 I’ve said it before here on the DP, and it has been said for years in the wrestling business – never, say never. And once again, the wrestling universe has come to a crossroads where “never, say never” will be tested. After Wrestlemania XXVI, in which we might have seen the great Shawn Michaels wrestle his final match, and a following Monday Night Raw which saw him bid his farewell, the question on everyone wrestling fans mind is: will he ever return?
And can you blame us? As is the case with most wrestling retirements, they rarely last. (e.g. Ric Flair, Hulk Hogan, Mic Foley and on and on). Michaels, who said during his farewell speech last night  that he will do everything in his power to stay retired, will now have the burden of staying true to that statement, as well as defying the ever so popular, “never, say never” concept in professional wrestling.

However, if Michaels does indeed stay true to his stance of staying in retirement, he should be applauded. In this industry, few rarely leave the business on their own terms. Whether it be by injury, death, or in the cases of many, hanging on in every way imaginable, the pro wrestler’s career, no matter how successful, ends with the only expression possible to describe it – a sorrowful shake of the head.

Yet much like his ability, legacy, and career, Michaels is different. After years of being a difficult person to deal with in the industry, a description Michaels apologized and owned up to in his speech, Michaels cleaned up his life and career through faith. Now a reborn man in the Christian faith, Michaels is hanging up the gear and boots to be at home with his wife and children.

Michaels retirement feels similar to Ric Flair’s once regarded retirement (36 Years: A True Gold Standard) to which every wrestling fan was sad to see the greatest World Champion of all-time leave. However, as caimed before, wrestling retirements do not last as Flair could not stay away from what he has done for 37 years, professional wrestling. Flair returned to pro wrestling in late 2009.

Yet, with Michaels retirement, it means much more to yours truly. Unlike Flair, I was not around to witness the prime years of Flair’s career. Yes, there are always tapes, DVD’s, and YouTube. However, the feel of the moment, the feel of the experience, and the feel of that certain connection was not there.
With Michaels, it is.

And on a Monday Night Raw where Bret Hart officially said his good-byes to the business, and Michaels made his farewell, another part of my childhood was covered with dirt.
Two of my absolute favorites – gone. 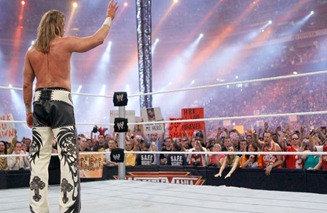 Not many will understand the feeling, and I’m guessing only those in similar situations such  as mine will understand, but if indeed Shawn Michaels is gone forever, never to set foot in a squared-circle again, he deserves a huge Thank you.

Thank you for the entertainment.

Thank you for coming into our homes to take us away from reality.

And Thank you for your sacrifices. 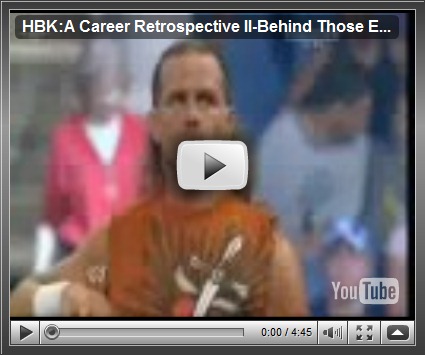 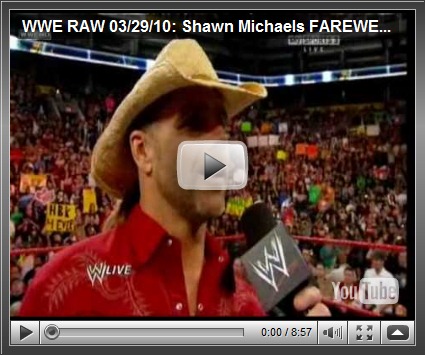 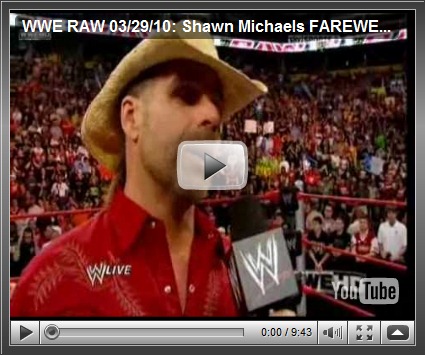