Can’t Prepare For The Inevitable 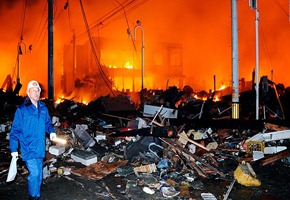 It seems not too long ago the world stopped in horror as we watched the horrific state that became the Republic of Haiti following a devastating earthquake. Then we did it again with Chile, and one more time with the floods and mudslides in Pakistan. Again, on March 11th, 2011, we stop and looked on as Japan was not just ravaged by a 8.9 magnitude earthquake, but a 6.6 aftershock, as well as developing tsunamis off it’s shores that now leaves the nation a complete wreck.

As more and more is revealed, such as the rising death tolls, continuing collapsing buildings, and the warning of leaked nuclear and radioactive material, the external dangers continue to present themselves. And with surrounding tsunamis that have formed from the massive earthquakes, assistance, aid, and recovery will be delayed.

Japan now finds their nation, one of the leaders and strongest in many ways in the world, at the mercy of mother nature. Even more interesting is fact that the Japanese government had scientific knowledge since 1976 that the earth’s tectonic plates were due to release massive amounts of energy resulting in an earthquake at any moment. Coming this morning several times in the form of earthquakes, the release occurred. And according to scientist tracking and evaluating the quakes, the full amount of pressure was not released. Which means – this can get much worse in the coming days.

And with these findings, the videos, the pictures, the constant updates of images and video, one has to be concerned about the possibility of an earthquake here in our own country. For it was not too long ago, shortly after the earthquakes in Haiti and Chile, that reports revealed movement patterns in the earth’s plates that warned and predicted a similar earthquake for Southern California within the next thirty years.
Scary.

And with such knowledge, the scariest thought is the one that reminds you that preparing for such an inevitability is impossible.
For today, the nation of Japan experienced that regardless of wealth, status, or preparation, life can change forever in the snap of a moment.

And once again, the good Lord reminded the world of this fact as we stared on in disbelief.