Past. Present. Future. Some Guys Just Don’t Get It. 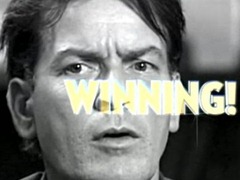 Some guys just don’t get it. Past, present, or future.
And that is a statement I believe to be true after reading several stories that littered our society’s news feed this week.

From the mismanagement of finances, unacceptable behavior, shocking statements, and the spoiled sense of entitlement portrayed this week, “not getting it”, is the only conclusion any normal, sane individual can come to. Unfortunately, in a world where all of these character traits are on a list with many other more, these are the types of actions that a) either propels one to fame, or b) keeps one on the front pages of newspapers and the leads of nightly news telecasts.

Exhibit A is Charlie Sheen. Yes, I’ve tried to refrain from mentioning Sheen in fear of assisting his self-aggrandizing ways, however, this post calls for an examination of Sheen to prove this point. However, the public meltdown we have witnessed over the past week regarding Sheen is one that is very, very sad. Actually, it is downright depressing. Watching Sheen parade around flaunting a dead-end lifestyle, and which, let’s be honest, is the base of his character on the show Two and a Half Men, is cause for concern. Living with women? Excessive drinking? Drug habits? Winning? Nope. Absolutely not.

More importantly and the biggest cause for concern, is that Sheen inability to realize the present that he is living in. His current obligation to his fans, his co-workers (including those that depend on him for their employment), and the sheer appreciation of his current lifestyle. All taken for granted.

Exhibit B is Chris Brown. Ah yes, the star that could have been. Anything attached to such a statement, will always be a disappointment. And Chris Brown is indeed a disappointment. This past week Brown released his latest album F.A.M.E, which was supposed to be the first step in Brown’s recovery from the fiasco of beating Rhianna like a coward (yeah, I said it). Nonetheless, after appearing on Good Morning America, Brown showed despite all the tweeting, statements, and certificates of achievements from anger management classes, Brown showed that he also, does not get it. Brown destroyed the GMA dressing room, including damaging a glass window and getting in the face of a producer before exiting the studio shirtless. The kicker? Brown walked down to West 4th street and played basketball.
Here is a guy loaded with unbelievable talent. There is no question Brown has it all as a performer. Unfortunately, Brown has no regards for his current lifestyle, or the one that could have been. He’s wrapped up in himself, and even worse, we will never see the Chris Brown we all thought was possible.

Finally, Exhibit C is Lawrence Taylor. Talk about someone who never got it, and of course, after this past week, the boat has sailed on him ever getting it. Taylor made several controversial statements on his case regarding soliciting an underage prostitute, that leaves many shaking their heads in disgust. Below are a couple of those comments:

'I am not the cause of prostitution - I didn't pick her up in no playground, she wasn't hiding behind a school bus, this is a working girl who came to my room.
'I asked her age, she told me she was 19.
'I had been on the road 10- 11 days, I made a phone call to a friend of mine and he made a phone call.
'Its the world of prostitution, you never what you are going to get.
'I don't card them, I don't ask for a birth certificate.'
'It's the oldest profession in the world, everybody does it.'

A man who has been forgiven time and time again for mistakes finally had an opportunity to make good on those chances. However, like exhibit A, and B, Taylor, a phenomenal football player and legend, also just doesn’t get it. Now, Taylor will forever have his legend, something of the past, be erased by aan action and a few statements that will change his image forever.

Exhibit A, B, and C. Past, present and future.

Three guys that unfortunately, doesn’t, haven’t, and will never get it.