March 30, 2011
Sports are all about emotion. Whether you are a spectator or participating, the thrill of the ride includes many peaks and valleys. Because of the clear cut result – win or loss – emotions in sports are always one of two extremes – excitement or heartbreak. Every and any individual that is a sport enthusiast has had there fair share of moments on either side of the emotional coin. In the following Pondering 10 list, yours truly will reveal the top ten moments in sports that caused tremendous heartbreak. And yes, I will admit, the following list are moments that truly effected my mood following the event. Without further adieu, my all-time sports heartbreak moments: 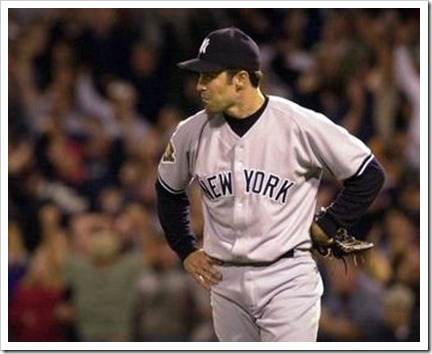 10. Mike Mussina Almost Perfect Game (9/2/2001) – One of my favorite pitchers in my lifetime, Mussina dominated the Red Sox for nine innings inside Fenway Park. Of course, my disdain hate for New England sports, I relished in the opportunity in a member of my New York Yankees throwing a perfecto in their park. With two outs, and one strike away from a perfect game, Carl Everett blooped one into shallow left-center to break up the gem. A moment that I literally felt for Mussina after watching his sarcastic smile as the ball fell. 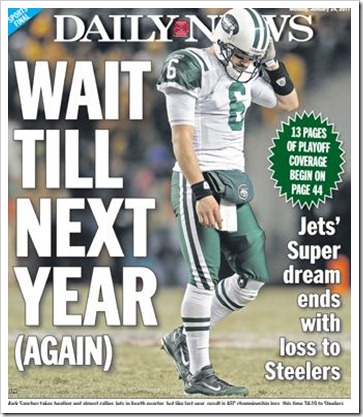 9. 2011 AFC Championship Game: New York Jets vs. Pittsburgh Steelers – After years, and years, and yes, years of losing, Rex Ryan has instilled a new culture within the Jets organization. After a surprise appearance, and loss, in the AFC title game the year before, the 2010 season was supposed to be the year. Every Jet fan believed this was finally the breakthrough. Well, after a valiant effort to get back into the AFC title game, Ben Roesthlisberger drove the nail in the Jets coffin, crushing the hopes and dreams of Jets fans everywhere. A loss that hurt much more than their appearances in 1999 and 2010. 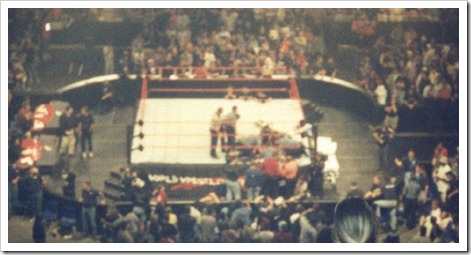 8. The Death of Owen Hart – I still remember sitting in my room attempting to rush through a social studies assignment in order to watch WWE (then WWF) Over The Edge. While hurrying through the assignment, a special report came over the nightly news that professional wrestler Owen Hart had just died from an accident at the event. I sat there with my jaw wide open in disbelief. Wrestling fans everywhere were devastated. Over a decade later, Owen’s death still resonates throughout the professional wrestling world as one of the biggest “what if” scenarios in the business. 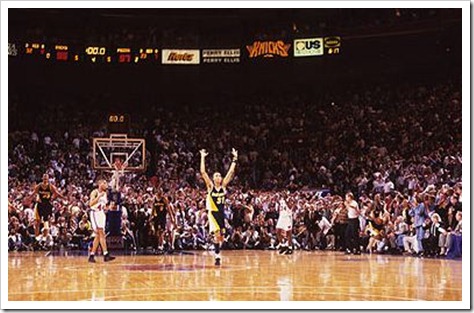 7. 1995 Eastern Conference Semi-Finals: New York Knicks vs. Indiana Pacers – It’s funny how often I refer to the 90’s Knicks when times were good, yet, they always seemed to be full of heartbreak. This series was the biggest proof of this with Reggie Miller’s dramatic eight points in the span of 15 seconds in game 1, and the infamous Patrick Ewing missed finger roll in game seven. This series brings back bad, bad, bad memories of Reggie Miller doing what he does best – driving a knife through Knick fans’ chest. 6. 1997 Survivor Series aka Montreal Screw Job – Although I don’t believe Bret Hart was the best wrestler of all-time (a future Pondering 10 list for sure), he was definitely my favorite growing up as a kid. Upon hearing that he was headed for World Championship Wrestling, I knew the Hitman’s prime was coming to an end. However, as a 12 year old kid, I simply wanted Hart to leave the WWE on good terms. Yeah, not so much. In hindsight, the Montreal Screw job was the beginning of the end of Hart’s career, and the beginning of a real and bitter feud between two of the greatest of all-time, between Shawn Michaels and Bret Hart. Luckily, we were able to witness their reconciliation. However, the screw job was a night yours truly witnessed the end of a childhood favorite. 5. The Isiah Years (2003 – 2009) – The absolute longest “moment” of my life. And a moment that somehow Knick fans are still paying for. After all the ranting and raving yours truly has done over the years here at the DP, there is no need to go into it. He ruined my beloved Knicks, period. And each year was more disappointing than the previous. Hopefully, one day we will be able to regain all of our draft picks and completely (talking to you Jim Dolan) rid ourselves of Isiah, the basketball terrorist. 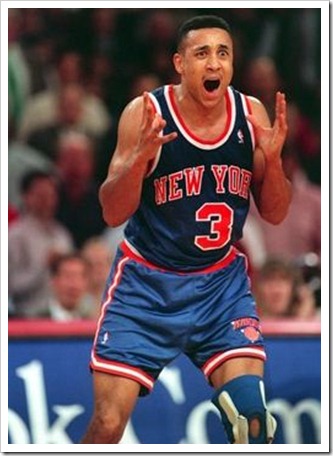 4. 1994 NBA Finals: New York Knicks vs. Houston Rockets – 1994 should have been the year. 1994 was supposed to be the year. Jordan off swinging a bat in the minor leagues. Getting past Reggie and the Pacers. Up three games to one in the NBA Finals. It was supposed to be our year! But, as usual, the Knicks found a new way to destroy the hopes of Knick fans. Despite the annoying OJ Simpson Bronco chase that cut most of America, and New York City from Game 4, The Knicks were set for the Canyon of Heroes. Instead Hakeem Olajuwon decided to show why he was called “The Dream” and John Starks decided to put up a statistical figure I will carry with me to my grave: Game 7; 2-for-18 from the field. 1994 left this Knick fan, scarred, and bitter. 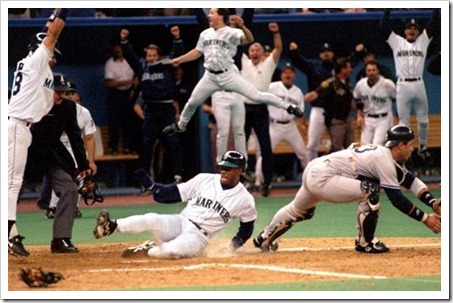 3. 1995 American League Division Series: New York Yankees vs. Seattle Mariners – Ah, the year before everyone jumped aboard. True Yankee fans knew how good we were in 1994, and because of the labor issues cancelling the season, 1995 was our chance to prove it. After finally making the post-season, and seeing Don Mattingly tear it up in his first post-season appearance, the Yanks had a 2-0 lead heading to Seattle. Seattle eventually forced a game five and won the series. I remember as a child wondering, why in the world Buck Showalter (who was, and is still a favorite manager of mine) had Jack McDowell in to pitch the bottom of the 11th? Didn’t like the move. And I was right. The image of Edgar Martinez’s double down the left field line in the Kingdome along with seeing Ken Griffey fly around the bases from first to win the series is still clear in my mind. At the time, to me, it was the biggest collapse for the Yankees until… 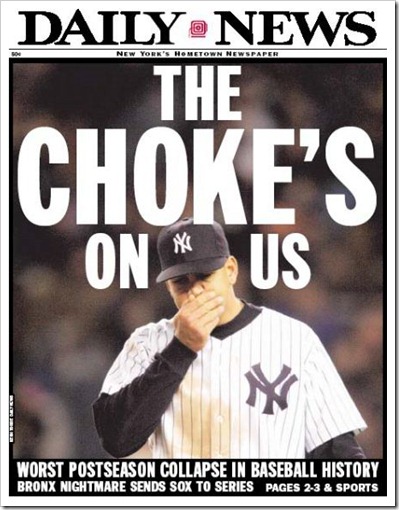 2. 2004 American League Championship Series: New York Yankees vs. Boston Red Sox – I’ll just get this out, 2004 does not exist in my life. I don’t talk about the 2004 season. It is just too hard for me to do so. And well, even for this Pondering 10, I won’t.  For those of you that aren’t aware, the Yanks blew a 3-0 series lead in the ALCS. I’ll leave it at that, and finish with this, if only Tony Clark’s drive down the right field line in game 5 had hit the wall… 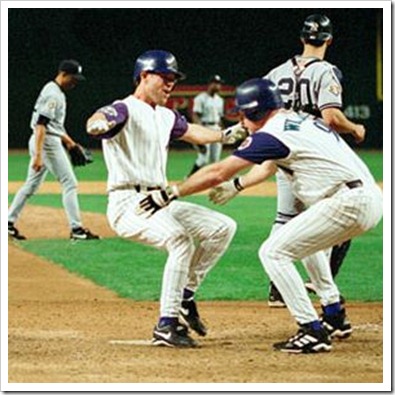 1. 2001 World Series: New York Yankees vs.  Arizona Diamondbacks – First, let me say, the greatest World Series I have ever witnessed in my lifetime. With all of the drama and what it meant to this country following 9/11, the 2001 World Series was remarkable. However, a crushing World Series loss where not only did I see my favorite Yankee, Mariano Rivera, become human, but the end of a dynasty that brought so many championships to New York City, saving this fan from the doldrums that were the Knicks and Jets. The crushing ninth inning of that game seven, punctuated by Luis Gonzalez’s broken bat blooper was one that literally left me disappointed and depressed for a few days. And yes, one that still hurts today.