Integrity At All Cost 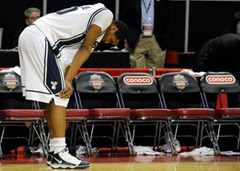 These were  some of the statements made in regards to the recent story of Bringham Young University basketball star, Brandon Davies, who has been dismissed due to violating the school’s honor code. Davies, the leading rebounder for a BYU team that is a viable contender to win the NCAA championship, was dismissed for having premarital sex with his girlfriend, a clear violation of the Mormon University’s honor code. Following the decision, the school is receiving much public criticism and backlash for its handling of the situation and for ruining a chance at a national championship.

However, one has to applaud the decision of BYU for remaining committed to it’s moral standards, which are in-line with it’s religious beliefs. NCAA athletics often have the false facade of being competition that is about “the sport, not the money” or “students playing for the love of the game”. While that is true, behind that false white bronco of a belief we often indulge in, collegiate sports at the elite level is often more corrupt and unethical than any form of athletics.

In an age where the business of television dollars drives the NCAA’s decisions, BYU’s gutsy call of character and faith over winning stands in the face of the “must-win” culture that is in college hoops. From the coaching scandals, illegal recruiting, academic-fixing, and lack od discipline, universities are placing winning and athletics at a higher priority than ever before.

What is also interesting, is to see where universities of religious foundations such as St. Johns, Notre Dame, and others are when it comes to their students violating simple character and moral principles. The same win at all cost mentality for such schools have also become the norm.

And let’s be honest, for those that are drinking the Kool-Aid and making Davies into a victim because of the BYU “tyrant-dictatorship” decision, let’s not forget, Davies understood the rules and guidelines of the honor code before he attended the university.

And most importantly, he accepted their scholarship under those terms.

In other words, he took their money and broke the agreement they made.

This is a lesson Davies may have never learned at any other college, university, or institution in the nation.

So yes, while BYU sacrificed a once in a generation opportunity at a national title, in the end, BYU protected the most important quality in it’s decision to dismiss Davies – the integrity of the school.

A quality that cannot be earned through winning.