The Heatles vs. The Phour Aces: Where Is The Hype?

As the NBA Season nears an end, it’s safe to say that the Miami Heat’s experiment of collecting big time talent on one team has been a successful one. I know, I know, I hate the Heat, so why the fond introduction? Well, although I despise the Miami Heat due to my Knick roots, and will always be disappointed in LeBron James’ decision to take his “talents to South Beach” (Disappointment: The True Fallout From The Decision), I have to be, and will be  honest.

The trio of James, Dwyane Wade, and Chris Bosh has been entertaining, impressive, and great for the league. After all, they are a lightning rod, regardless of the outcome of the game, the self-proclaimed “Heatles” (seriously, who makes up their own nickname?) have been a fascinating story. And of course, this was also due to the hype and grandeur that ESPN has emphasized every chance they get.


With baseball just one week away from throwing it’s first official pitch, and after all of the hype and attention the Heatles have received, one has to wonder, where is the hype for the Philadelphia Phillies and their new pitching rotation? C’mon folks, there is a reason the font of the title is the way it is in the banner. This message goes out to a certain you-know-who organization with the power to give a certain collection of top athletes their fair due as well.

The Phillies, who will boast a ridiculous video-game-like rotation of Roy Halladay, Cliff Lee, Roy Oswalt, and Cole Hamels heading into the season, have not received one ounce of hype from anyone, anywhere. Yes, even, ESPN.

And I understand that unlike basketball, the same aura of must-see is not there as these guys will not exactly be playing together. In fact, if you purchase a ticket, you will only get to see one of the four. However, the “Phour Aces” as they are being touted by Phillies fans  (nice play on the “ph”), have a chance to do something really special.

Since forming this nightmare for opposing teams, the Phour Aces have gone about their business, led by the work ethic of the best pitcher in the game, Halladay, who prefers to do his talking through his actions than by glitzy press conferences. This is the same guy that threw a perfect game, celebrated with teammates, and then hit the weights that same night to prepare for his next start.

And unlike LeBron James needing a one hour special to complete their unit in Miami, The Phillies did so the old fashioned way, through a simple press release: “Cliff Lee agrees to deal with Philadelphia Phillies”.

This group is quiet, hard working, and focused, which is actually very anti-Heatles.

Their only comment in a joint interview, “This could be a very special year.” 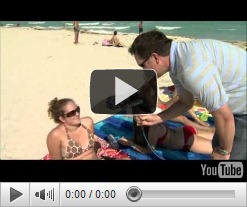 Is basketball even relevant in Miami?

In fact, the only striking similarity between the Heatles and the Phour Aces is their common bond of both swooping in to acquire a star athlete that spurned New York City.

One could also argue, the members of the Phour Aces have a far more impressive collective resume than that of the Heatles.

Here are some stats for you baseball fans, last year, the Phour Aces combined for 58 victories. Keep in mind, that’s with Oswalt, Lee, and Hamels all missing significant time due to injuries.

In 2009, the group combined for 73 wins. 73 wins! Imagine if they can remain healthy along with the Phillies potent offense. The sky is the limit in 2011.

Heck, let’s just simplify it to it’s basic concept: every team in baseball seeks a true ace to head up their staff. Few have one. The Philadelphia Phillies have four, period.

And because of that, every night in Philadelphia this summer will be must-see at the ballpark. The Phillies rabid fan base that lives and breathes for its team is definitely an element missing in the entire Heatles phenomenon. No one in Miami cares! Philadelphia, well, we all know how crazy Philadelphia are about their sports. And yes, they show up on time (See here Miami Heat “fans”).


So yes, the Phour Aces may lack the flash of the Heatles, or even the downright crazy, odd kind of charisma displayed by the Heat trio. However, on opening day, there will be no worries about fitting in, questions about jelling,  or worries about handling the spotlight will be necessary. This is a collection of four great pitchers, who are all legitimate aces, all playoff tested, all accomplished, all focused, and all in their prime. And oh yeah, all on the same team!

So once again, where is the hype? (Looking at you ESPN)