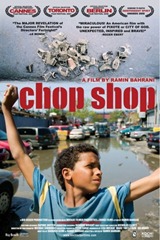 A young adolescent boy, Alejandro, works, lives, and hustles in and around a Queens Auto-body shop in attempt to make a better life for his 16 year old sister and himself.

Alejandro eventually realizes that his dream, and in his eyes, the ticket out of his current life, is right in front of him. He takes Isamar's money from her pants and goes for it all by purchasing the old vending truck.

"I can fix this" (In response to being told that his dream of owning a vending truck will not happen because of the amount of work necessary to meet health codes).

Chop Shop is another movie from Ramin Bahrani (Man Push Cart, 2005) that sheds light on a part of American culture, more specifically, New York City, that is often never heard of. The film touches base on the lives of adolescent immigrants that struggle to survive, and the hopes and dreams they chase each and everyday. The film also takes a close look into the sub-culture of these areas that are often overlooked.

Chop Shop does a tremendous job in presenting all areas of this life through the character of Ale, the young adolescent and the peculiar Willets Point section of Queens, NY. Ale, hustles, works, saves, and even steals in an attempt to attain a better life for himself and his 16 year-old sister, who he later finds out has been prostituting herself for extra cash. While his expectations are never met, the film sends a clear message of a child's innocence being sacrificed for survival and the message that Bahrani wants to get across with a shot of a Shea Stadium Billboard, "Make Dreams Happen".

Chop Shop is a very interesting indie film for the thinker that that is genuine, enlightening, and very, very authentic. The film comes across at times as a depiction of a true story rather than a film. And in a very cold serving of truth, lt’s viewer in on a world that that exists in our neighborhoods.

A recommended view for all, especially New Yorkers.