The Career Of Manny Ramirez: Why Should We Care? 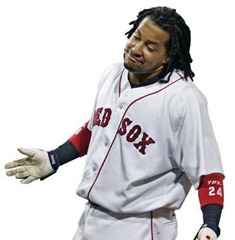 As the news broke that Manny Ramirez had retired, I must admit, I was indeed shocked. It was so sudden. So abrupt. So, in the middle of an attempt to prove to the world that he was indeed still a productive player.
And then, I learned why he decided to retire: for violating (and failing) once again, Major League Baseball’s drug policy. Yeah, not a shock anymore. The biggest shock of them all is the continued mercy and pass that Manny Ramirez continues to receive.
I will admit, steroids, drugs, or PED’s aside, Ramirez is one of the greatest right handed hitters I have ever seen. And as a Yankee fan, I’ve seen that swing too many times do a lot of damage. And while his reputation as being the fun and aloof superstar made him into a character, his work ethic as a hitter can never be questioned. You will hear it all the time from everyone that has penciled his name into a lineup: Mike Hargrove, Grady Little, Terry Francona, Joe Torre, Ozzie Guillen, and Joe Maddon. Unfortunately, the praise for Ramirez ceases there.
Ramirez’s character, the same one that made him into the larger than life star, is the same one that caused his crippling legacy downfall. Ramirez, a guy who has been all about himself and the money, attacked clubhouse personnel with the Red Sox, faked injuries to force trades, and did some of the silliest (and most unprofessional) acts in the game. Apparently, it was “Manny being Manny”, but as I stated after the first time he was busted for violating the policy (No Excuse: The Fall Of Manny Ramirez), if we believe that statement, then we are all fools.
Here is a guy – the only guy ever – to have failed MLB’s drug policy twice in the post steroid era!
The only person!
One could could go as far as asking if he ever was clean? Truthfully.
Yet, we continue to ridicule, bastardize, and alienate our once heroes during an era when it was common. Barry Bonds, Mark McGwire, Roger Clemens, anyone?
And even those that have admitted, and have moved on to prove that PED’s were not the cause for their careers. Alex Rodriguez? Andy Pettitte?
(Good Cheater, Bad Cheater)
Yet, we continue to ask the proverbial Hall of Fame question with Ramirez’s name to it. The answer is obvious.
No.
Heck no.
Hey, just calling it like it is.
I think Tim McCarver had the best line to describe Manny Ramirez during last Saturday’s telecast of the Yankees and Red Sox when he called Ramirez’s career, “irresponsible”.
And honestly, that is the best way to put it. A waste of God-given ability and talent.
Players like Ramirez, I clump in with the likes of Allen Iverson, Tracy McGrady, Stephon Marbury, and the Randy Moss’ of the world.
Extraordinary talent and zero responsibility.
In the end, Ramirez will never see the Halls of Cooperstown, may become one of the saddest stories in the history of the game – including the fall of Aaron’s homerun record, and ultimately, the biggest confirmed PED user we know of. 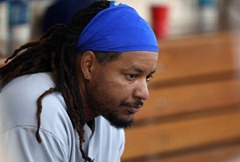 And honestly, in some odd way I admit I’ll miss seeing that swing…
However, in true “Manny Being Manny” fashion, he won’t care.
That sums up the career of Manny Ramirez.
And because of that, thus is the reason we shouldn’t care either.