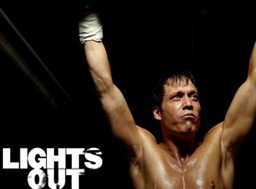 Why does every modern television show that I immerse myself into becomes cancelled controversially?

First, it was Friday Night Lights (Set to conclude this summer), and now it is the drama series, Lights Out.

Yours truly doesn’t have many appointment-like television besides sports and pro wrestling, but Lights Out slowly became that kind of viewing for me.

For those of you who aren’t aware, Lights Out was a drama series about a former World Champion boxer, Patrick “Lights” Leary, and his comeback to reclaim his thrown amidst various struggles financially, physically (a battle with pugilistic dementia), supporting his family, and dealing with the inner workings and underground deals that happens in the world of boxing.

Like many other boxing shows/films, Lights Out at first was compared to the ever-so-popular, Rocky Series. However, even as a fan of Rocky, Lights Out presented a product that had much more depth than Rocky ever had. Rocky, which usually presented the character of Rocky Balboa as a standup guy with an immense heart that goes through the same struggle-train-overcome scenario, the character of Lights Leary, like many characters on the show, is very deep.

Lights, the former world champion who now suffers from pugilistic dementia and is financially broke from the mismanagement of his manager/brother, looks to get back into the ring to secure the futures of his family, especially, his little girls. Along the way on his big comeback, Lights does many wrong things such as dealing with organized crimes and shelving his dignity for a big pay day. The line, “sometimes people do 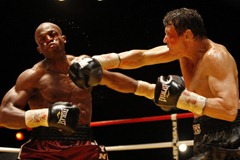 wrong things, for all the right reasons” is one that comes to mind from the series.  Especially the eyebrow raising and jaw dropping line to his wife after he defeated "Richard “Death Row” Reynolds to regain his thrown:

“Who won the fight, Theresa?”

The other characters are also very deep, including Lights’ wife, Theresa, his brother, Johnny, and the always entertaining crooked promoter, Barry Word. And we can’t forget the character that was around for two episodes, but ultimately grabbed viewers like no other series, in Ed Romeo.

And how about the fact that a boxing film/series that actually presents the fights in real time, and not just highlights? It’s the little things like that that set Lights Out apart.

While highly acclaimed by critics, and absolutely loved by its viewers, the series performed very low in the ratings. Another similarity to another favorite and exiting series in Friday Night Lights. Yet, shows like Jersey Shore and other junk reality, mindless drivel television remains on television. Not throwing daggers, just blogging.

Ultimately, Lights Out will be highly missed. A show that actually produced great drama, great writing, and even better acting is gone forever.

Later this year, I’ll probably be writing another post like this as we turn out the lights on Friday Nights.

And as I write this, I just saw a commercial for “Mob Wives”.