Goodbye, and Thank You, Edge

April 15, 2011
This one definitely came out of nowhere. While watching Raw this weekend, the graphic that showed Edge’s impending retirement was one that caused immediate interest. I knew, all die-hard wrestling fans knew, that Edge (real name Adam Copeland) had made comments a couple of months earlier stating he would retire in a few months due to physical reasons. As the ten o’clock hour hit, Edge’s Alterbridge music hit (in m opinion, the best in pro wrestling) and he made his way to the ring, everyone knew that this “retirement” was now for real.

As he stood in the ring with a live mic thanking the crowd for all that they did for him as well as going through the highlights of his career, it was a bittersweet feeling.


Gone now, is one of the true wrestlers of the past generation that came up the right way. And while I’ll refrain from going on a purist wrestling rant, Edge did indeed paid his dues, and worked his way up the card the way it used to be done – the way it should be done. From working dark-matches to the tag scene, to the mid card titles, winning the World Championship and of course, headlining Wrestlemania, Edge has done it all. In fact, he mentioned something I didn’t realize, he will retire with the most championships (total) in the history of the company. That in itself says a lot.

On the other hand, it is very refreshing to see a wrestler in this business being taken care of, where after 20-plus years of abusing his body, Edge will not be crippled heading into his golden years. A sight we see way too often. And despite being forced out by an injury that could have eventually paralyzed him, similar to Stone Cold Steve Austin, we know he’ll be around in some form, and the Hall of Fame will be calling him very soon.

With that said, as we say goodbye to another great career and another wrestler that somehow grew up as we did every night on our television screens, I would also like to thank him. Thank you Edge, for what you do. Thank you for putting your body on the line every night just to take this fan away from reality for a few hours. Thank you Edge. Thank you, Adam Copeland. 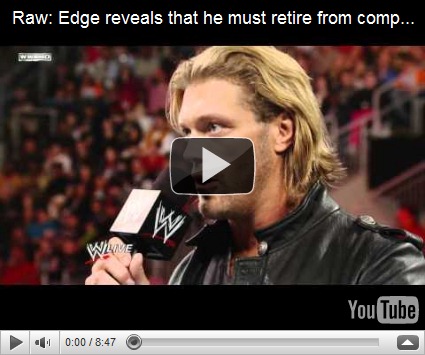